Despite completely losing my voice to a cold yesterday morning, I schlepped myself and my copy of The Undoing Project down to the Marriott in New Orleans to get Michael Lewis’ signature. That is after I frantically searched for but could not find my paperback copy of Liar’s Poker, my favorite Lewis book. Michael was in his hometown to speak at the Annual Luncheon and fundraiser for the Bureau of Governmental Research (BGR). BGR provides citizens, policymakers, and media with independent, nonpartisan research about government in the New Orleans metropolitan area. Every city needs a BGR. 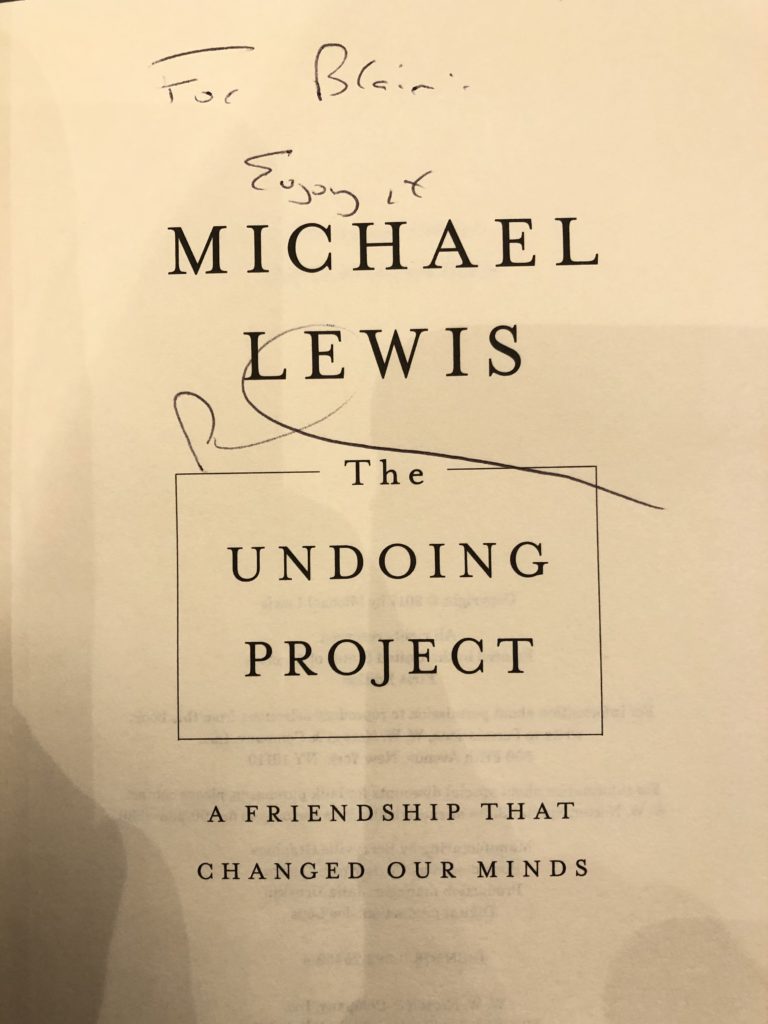 I rode the coattails of my friend Carol, who knew Michael well enough to walk up and give him a hug before the presentation, and I got my signature.

Gordon Russell, prize winning investigations journalist for The Advocate, asked the questions, but Michael’s answers mesmerized the audience and took center stage. Here are some of my highlights.

On His New Podcast, Against the Rules – When Michael releases a best-selling book, 300,000 – 400,0000 people buy copies in the first week. But the podcast received 1 – 1.5 million downloads per episode. The first season focused on the role of referees in American life and was inspired by Michael’s experience as the parent of kids who play sports. He told the most amazing story from one of his daughter’s softball games.

Eight years ago, the coach of the opposing softball team cursed out the home plate umpire for what he thought was a bad call. Soon, all the parents in the stands were arguing with each other over the call. The umpire ejects the coach from the game. It turns out, the coach is also the owner of the fields on which the game is being played. He proceeds to fire the home plate umpire on the spot. She sulks as she leaves the field and walks to her car. Michael follows her to the parking lot to encourage her not to accept her firing, but also to ask about her experience working as a referee in youth sports. He learns that episodes like these are all too common today.

Michael asks himself – what happens to society when we lose the role of a third-party, neutral referee, and not just in sports? He learns that people in positions of power will begin to abuse that power, and his fabulous podcast explores this very real phenomenon playing out across American society.

On His Latest Book, The Fifth Risk – Michael studied workers in the federal government after he heard that the Trump administration fired hundreds of employees responsible for overseeing the transition of crucial government jobs during the time between the election and the inauguration. The current administration did not address the transition of power in key government jobs such as overseeing food supply safety, nuclear weapons, and disease control. Michael shared that before he wrote the book, he had an image of federal government employees as perhaps lazy, low energy types. But he found incredibly talented individuals with a true sense of purpose, who were not working for either the money or for fame.

Michael shared the story of the sole oceanographer for the U.S. Coast Guard, a man who painstakingly studied how thousands of different objects drift in the ocean. This oceanographer wrote algorithms to predict the location of each object given existing weather and current patterns. It is estimated his work has saved thousands of lives since implementation in the early 2000’s. On the first day that the Coast Guard in Miami started using the technology, a 300 pound man went overboard on a cruise ship. Normally, the Coast Guard would be unable to locate an individual hours after falling in to the ocean. But in this case, they found him and saved his life.

A Book on New Orleans? – Michael shared that ever since Hurricane Katrina in 2005, he has been trying to figure out how to write about the city’s recovery and transformation. In response to an audience question, he said his impression on city government before Katrina was benign ineptness and possibly corruption. Today, he believes most New Orleanians operate under the exact opposite assumption, as post Katrina administrations have worked hard to shore up finances and restore trust in city government. But Michael sees the biggest change in New Orleans’ society, and says the change in people’s energy is noticeable.

On the Stock Market – This was a business crowd, but not necessarily a finance crowd, and one question from the audience was what Michael thinks about the stock market right now. I loved his answer. First, he said “If you see someone who looks like me trying to sell you a financial product of any kind, run fast in the opposite direction.” Then he added that most people are best served making a few, conservative decisions about where to place their assets – basically the asset allocation decision between stocks, bonds, and cash. He said trying to pick individual companies is anyone’s best guess, and that nobody knows which direction the market is going tomorrow.

How He Interviews Subjects for His Books – First, Michael said if anyone immediately agrees to be the subject of his books, they probably are not the right person to write about. He also told a funny story about a job interview in college. The interviewer acted like he did not have time for the interview, but asked Michael to help move furniture from one office to another. Michael obliged, and was surprised when he was offered the job a few weeks later without a real interview. He later found out this was a tactic of the interviewer when a new co-worker shared that he helped the boss move that same furniture back to the original office a few days later! This instilled in Michael a principal he uses with interview subjects – he prefers to go out and do something with them rather than sit down and have a conversation.

What He’s Working on Now – A second season of his podcast – Against the Rules. He wrote a television show that was picked up by Warner Brothers. It centers around the Cuban baseball player trade in the 1990’s. He wrote an essay that is essentially a memoir about being a parent to serious players of youth sports. He said his wife still regrets going down the travel ball path, and that the professionalization of youth sports in unreal. Whenever we get a new President, Michael will go back and write a sequel to The Fifth Risk, studying the next transition in the federal government.