I was in London this week for the 72nd CFA Institute Annual Conference. Along with almost 1,200 CFA charterholders and members from around the world, I listened to presentations around the theme of Disruption. There is something magical about assembling a group of investment professionals who control capital and allocation decisions for trillions of dollars of global wealth.

On Sunday, I attended my first meeting as a member of the conference Advisory Group. We brainstormed on topics and speaker ideas for next year’s conference in Atlanta. I won’t give away any spoilers, but suffice it to say the idea generation around this table was like none other. This was my first time meeting Richard Stott, an Oslo based advisor I have followed for years on Twitter. I enjoyed meeting Susan Spinner of Germany and Lynn Raebsamen from Hong Kong, two highly accomplished women in finance. Of course it was great to reconnect with Marg Franklin of BNY Mellon in Toronto and to see the CFA Institute staff members Charlie Henneman, Cheryl Evans, and Julie Hammond. 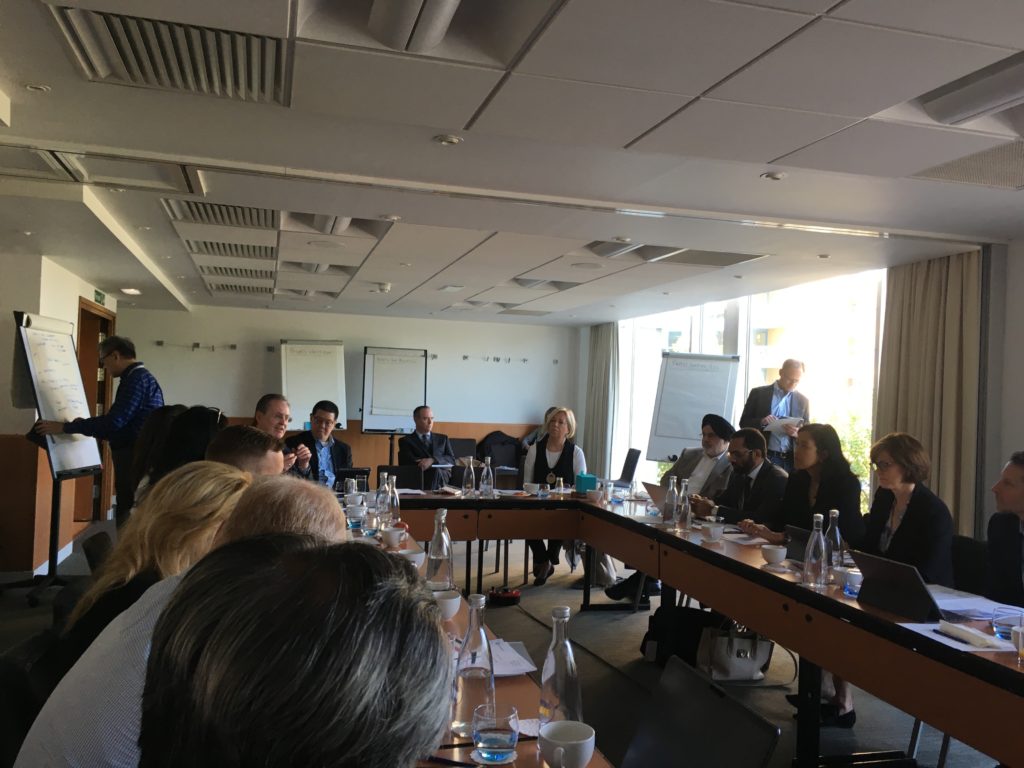 The conference began that afternoon, and Daniel Pink was the evening keynote. He spoke about the science of timing. There is data to guide the opportune time of day to perform different types of activities. Although humans are divided in to three chronotypes – larks, owls, and what Pink calls “third birds – most of us skew towards peak performance in the morning. Night owls comprise only 20% of the population, and unfortunately, most of the traditional working world is designed to work against them. Pink sited two studies on mood levels throughout the day which both found that there is a morning peak, followed by a decline that troughs in the early evening, then a recovery before bedtime. Pink suggests we structure our work with this information in mind by scheduling vigilant tasks during the morning peak, administrative tasks and breaks during the decline, and brainstorming/creative activities during the evening rebound. He stressed the importance of avoiding hospitals or doctor appointments in the afternoon because mistakes are significantly higher during the trough period. Pink made the case for taking real breaks during the workday, a concept foreign to most Western “eat at your desk” tendencies.

We think that timing is an art, but it’s really a science. – Daniel Pink 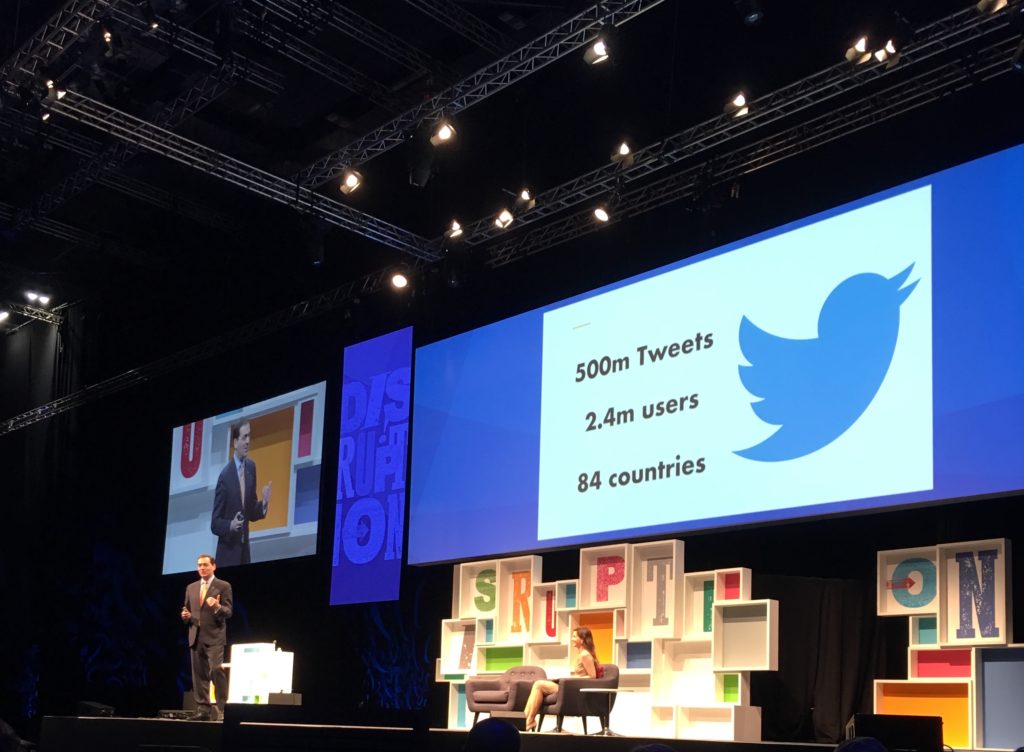 Daniel Pink on stage at the 72nd CFA Annual Conference in London.

Day 2 kicked off with a surprise. HRH The Prince of Wales addressed the audience by video on the topic of climate change. Wow.

His Royal Highness The Prince of Wales contributes to the #climatechange debate at the 72nd @CFAInstitute Annual Conference, hosted with @cfauk. Tune in to @princesa4s message: https://t.co/IWF7GnxmPJ #Disrupt19 pic.twitter.com/D5qiUn0yW0

Then Peter Zeihan, formerly of Strafor and author of The Accidental Superpower took the stage to discuss geopolitics. Short summary, he believes everything is going to hell in a handbasket. Among the many provocative predictions he made – all using great data – were that China must completely cave to the U.S. in trade negotiations and that London will lose 2/3rds of its financial jobs as a result of Brexit. And he sees no end to Brexit other than a hard divorce. What I appreciate most about his presentation was his emphasis on demographics in various countries. For example, Mexico with its robust young working population is not viewed as a competitor the the U.S. in trade negotiations, while Canada, with its aging population, needs to export its goods to the U.S. This, Zeihan surmises, is why Canada capitulated in the new NAFTA negotiations within 7 days of the U.S. and Mexico reaching a bilateral agreement. Zeihan sees China as extremely over levered and characterized the One Belt One Road program as a way to dispose of excess production, essentially building bridges to nowhere. 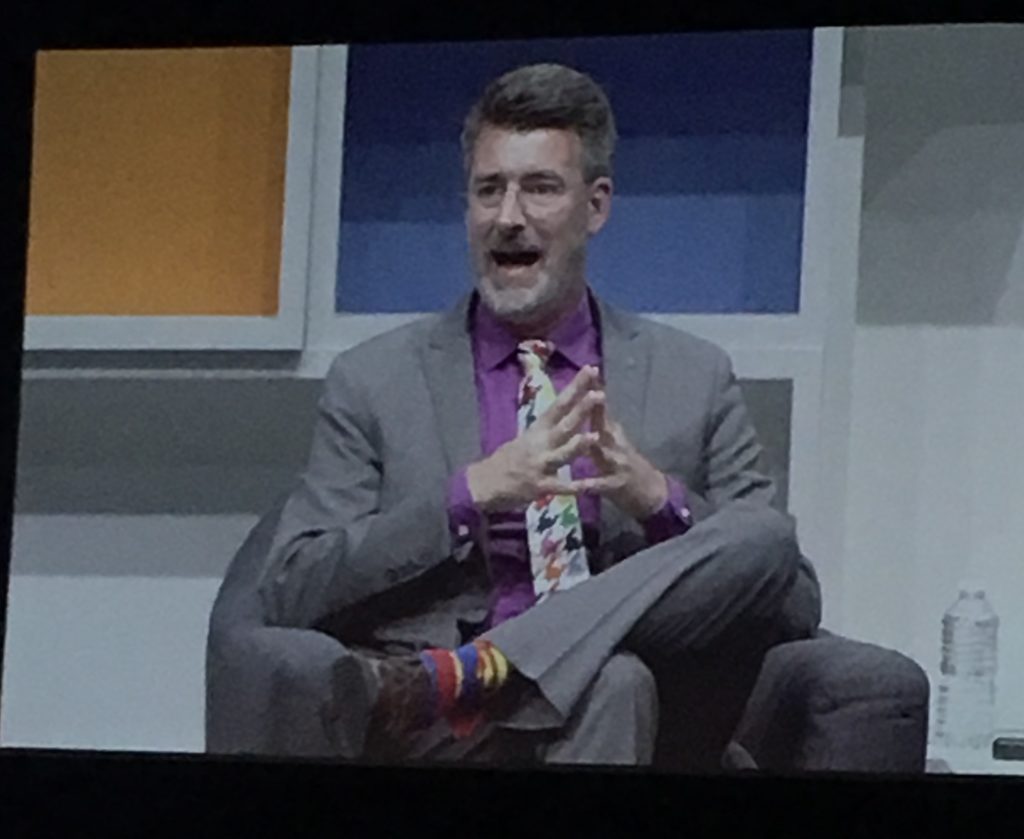 Monday night, the CFA Society UK unveiled a new certificate program on ESG investing. They are looking to pilot the program with 150 candidates this fall. I am excited to see if the program gains traction. Kudos to CFA Society UK for developing this program. 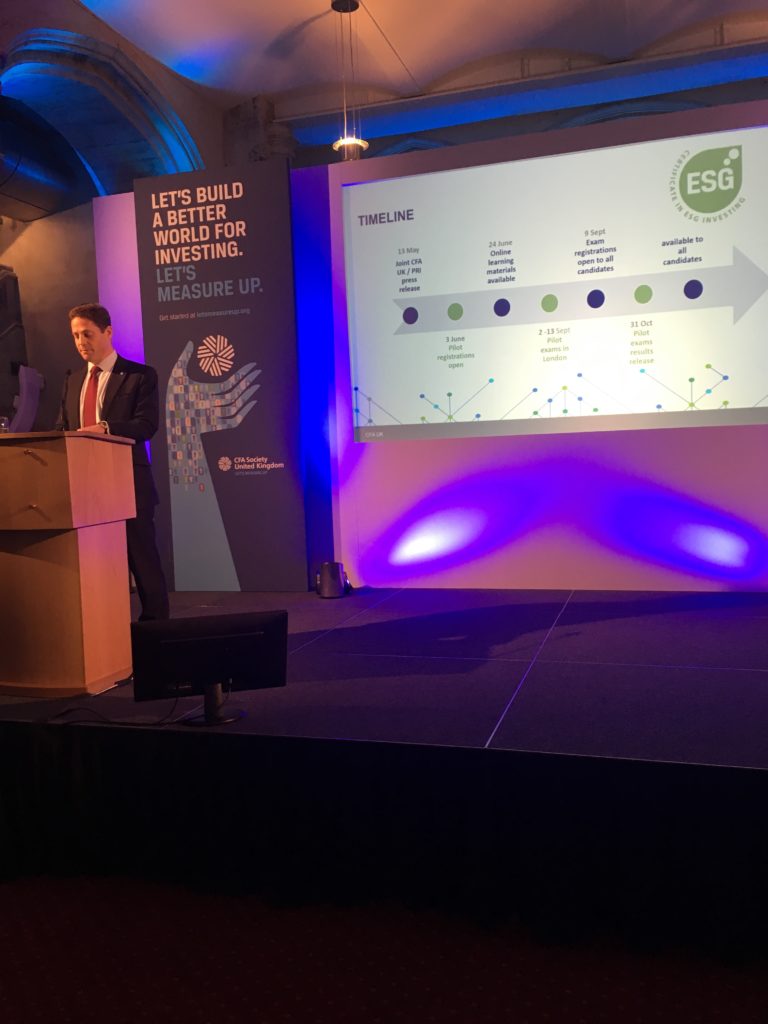 The next morning, Mark Yusko took to the main stage with predictions almost that were almost the complete opposite of Zeihan’s. He made the case for why now is the time to be invested in emerging market equities. He cited valuations but also growth prospects. Yusko noted the size of the Chinese middle class and the country’s transition away from exporting finished goods to domestic consumption. He noted that while the U.S. has 80 million millennials, China has 340 million. The Chinese middle class is now 740 million people. When asked about active or passive investment in emerging markets, he stressed that he doesn’t want to own state-owned enterprises, but rather than small, entrepreneurial companies. Yusko is also a strong bull on cryptocurrency and blockchain calling it – the single biggest wealth creator any of us will see in our lifetime.

Next, Anne Richards, newly cemented CEO for Fidelity International, urged the audience to find solutions to income and wealth disparities being created by capitalism in its current form. She noted that forty years ago, we would view today’s current market environment as Nirvana – low unemployment, low inflation, and low interest rates. But instead, we are experiencing political unrest around the world. She made a provocative statement about wealth disparity in the U.S. today versus France in 1789. Short story, today is much worse than the moment prior to the French Revolution. But Richards has a great point that asset managers should seek our own solutions rather than waiting for government to enforce one upon us.

In the afternoon, I moderated a session on advising global wealthy families by Philip Marcovici. I cannot wait to read his book, The Destructive Power of Family Wealth. Marcovici said that any amount has the power to destroy a family, and that the key is to avoid surprises when passed on assets to future generations, or not. Besides being an encyclopedia on the tax implications of cross-border investing, changes in citizenship and domicile, and tax treaties, Marcovici retired from the practice of law to advise wealth families and global institutions full time. He encourages families to write family constitutions or charters that lay out the first generation’s key principles and vision for the future. He also facilitates family retreats, where he says he interviews each family member individually before embarking on group discussions. This is complicated work for the ultra high net worth, but the principles on communication are applicable to all families. Despite the hour and 45 minute length of his presentation, I was on the edge of my seat taking notes throughout.

Money comes in to every single relationship. – Philip Marcovici

Tuesday closed out with none other than crowd favorite and one of the most brilliant economic minds of today, Mohamed El-Erian. No one has thought more about global central bank policy and the uncharted territory we find ourselves in since the Global Financial Crisis. He admitted his shock at the complete u-turn in Fed policy this year – both halting rate rises and balance sheet reduction. He predicted that China will concede to the U.S. on trade negotiation stating the U.S. can win a trade war with any country because exports are not a meaningful part of the economy. Pair that with the fact that President Trump appears willing to withstand any damage to the U.S. economy necessary to will the trade war. El-Erian does not believe European GDP can surpass 1% this year, while he expects the U.S. to grow at 2.5 – 3%. Most importantly, he described a concept he calls the hollowing out of the middle of many normal distributions. Whether it’s a shrinking middle class, political polarization, or declining mid sized companies we are experiencing many bimodal distributions today. The implications of bimodal distributions, and the mistakes in judgement they cause are potentially catastrophic.

The highlight of the conference for me was the opportunity to meet El-Erian in person and shake his hand. He even told me that he enjoys my tweets! What a moment.

This might be my favorite photo of all time. So great to finally meet ⁦@elerianm⁩ in real life. #Disrupt19 pic.twitter.com/MTO2mpfjWr 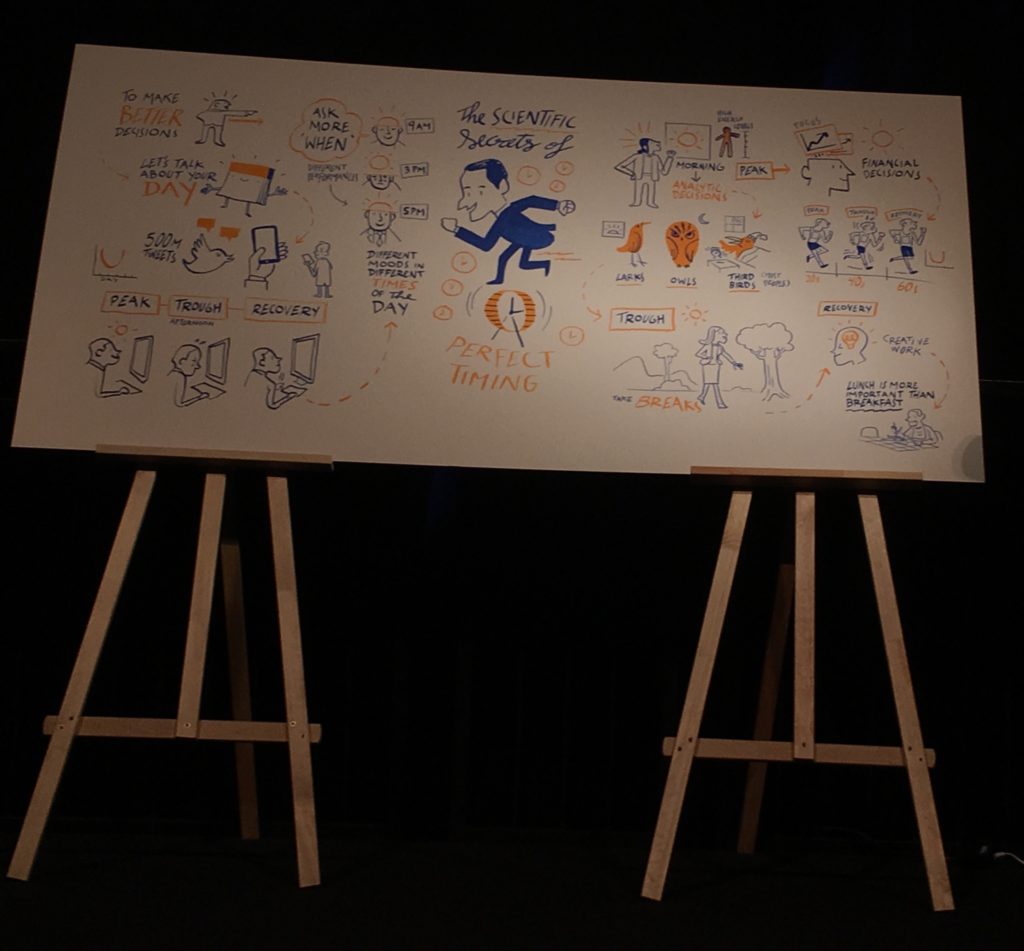 There was an artist creating depictions for several keynote presentations. This one was from Daniel Pink. 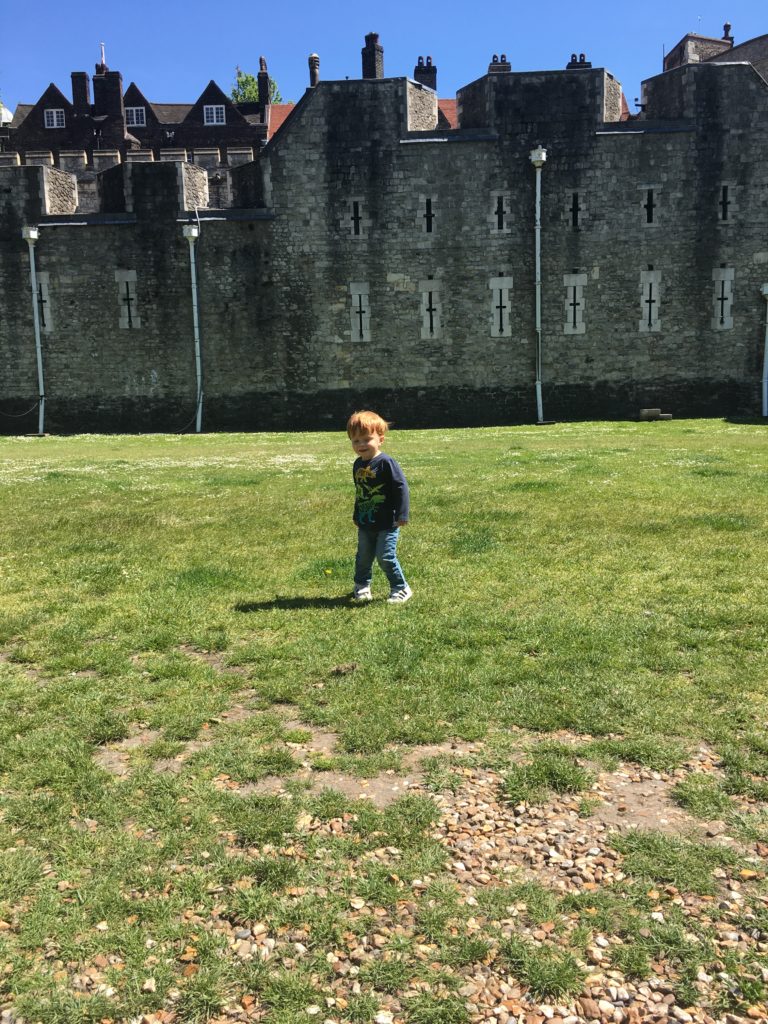