I invited Meredith Jones, author, speaker, researcher, and expert in alternative investments, to speak to the CFA Society of Louisiana about women in investing. Or rather, the lack of women in investing. Lucky for us, she accepted, and I had the pleasure of meeting her in person for the first time. We have followed each other online for years.

Meredith spoke to a group of CFA Society Louisiana members and guests at a lunch in the French Quarter. For over an hour, she enthralled and entertained us with facts, research, data, and suggestions for solving the problem on the lack of women in financial services. Even though this is a topic near and dear to my heart, I furiously took notes on studies and data new to me. It doesn’t hurt that Meredith could be a comedienne who, unlike me, managed to hold on to her southernness. 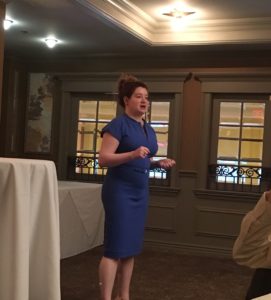 Meredith at the February meeting of the CFA Society of Louisiana.

Here are a few of my takeaways from her presentation:

Why are there not more women running mutual funds, hedge funds, private equity, or venture capital? According to Meredith, it’s a circular argument. Investors worry about taking “the risk” on small, new asset management companies with less money for staff and operations. In turn, these money managers cannot get the initial allocations to beef up their operations.

This is infuriating and received audible shocked reactions from the audience.

Girls are less likely than boys to receive an allowance from their parents. When girls get paid to do chores, they receive less than boys. And to the extent there are any boys who babysit, boys get paid MORE to babysit that girls.

In Finland, the identity of individuals, and hence their gender, placing trades is known and can be studied. It turns out that not only do women have better investment performance, they provide valuable liquidity during down markets. Researchers found that men tend to sell stocks to women when market are trending downward, while women sell stocks to men when markets trend higher. Women actually buy low and sell high, while men (on average) do the opposite.

Last year, only 2% of venture capital funding went to female founders. This is up from a whopping 1.9% in the year prior. Female led companies are faster job creators, and during the financial crisis companies founded by women were net adders of jobs while millions of people were getting laid off. Imagine how we would all benefit by redirecting some of the other 98% of venture capital funding to start-ups led by women.

According to Meredith, the solution is not easy. She recommends tackling the issue from three angles. First is the pipeline of young women who want to manage money. Data shows that girls start losing interest in math at age 12. Unfortunately peer pressure plays a role in this. It’s not “cool” to be a girl on the math team. (Certified nerdy math team girl here!). But there is also evidence that teachers call on girls less in math class, leading them to lose interest and stop raising their hand in the first place. Ugh.

The second P is parenting. There are biological realities that cannot be changed. Women must make the decision to have children before a certain age. But as Meredith points out, parenting is not solely a women’s issue. Most fathers want to attend soccer games and 4th grade plays, too. And you know what, the men have been doing it. They just leave the office without announcing the reason. Junior men and women feel they cannot claim such leeway with their time at work. This is why firms need a culture shift championed from the top.

The final P is promotion. While women make up 50% of entry level positions in finance, they are not making it to the top. The reason for this isn’t simple. As we have learned from the blind orchestra auditions, hiring managers don’t always notice unconscious bias. It’s easier to hire someone who looks like the last person in the job, and 95% of the time that’s a man.

You can get a feel for Meredith’s southern charm, wit, and honesty by watching her recent TED Talk.

For more on Meredith, visit her website here. And check out her award winning book, Women of the Street: Why Female Money Managers Generate Higher Returns (And How You Can Too).