This week, I witnessed the craziest thing I’ve ever seen in the stock market. A merry band of traders, congregating on the popular internet message board, Reddit, successfully pulled off a massive short squeeze on shares of retailer GameStop (GME). That sentence was a mouthful. Let me try to explain.

GameStop is a brick and mortar retail store selling physical video games. Who knew? It turns out, a group of traders on the sub Reddit /WallStreetBets knew. They are GameStop customers. Which is why they took issue with GameStop being one of the most heavily shorted stocks on Wall Street. Who wouldn’t expect the Blockbuster of video games to go bankrupt?

Selling a stock short is a bet that the price will go down. Short selling is risky because it requires enough collateral to hold on to the bet once it goes against you. Apparently, GameStop shorts have been as popular with hedge funds recently as the Yen/Dollar carry trade was before the financial crisis. The short interest in GameStop shares was very high, making it the perfect target for this attack strategy. If the shorts need to cover their trades, such as in the case of a margin call, they will scramble to buy shares that will be in short supply, exacerbating their losses.

That is a classic short squeeze.

To their credit, the Reddit bros figured this out. They pooled small trades and bought as many shares as they could. It’s a crowd-sourced pump and dump scheme.

By leveraging their GameStop bets with call options, the mob caused a gamma squeeze. Investment banks and financial institutions that serve as market makers in the options market will hedge their exposure by either buying or shorting shares of the stock. In the case of writing call options, banks buy shares to hedge their exposure. The higher the stock goes, the more shares the banks purchase to hedge. GameStop’s the stock price exceeded all available call option strike prices on Monday. This meant that everyone on the other side of each call contract, was losing money and needed to buy more share to hedge.

The result, GameStop shares, which hit a low of $2.80 on April 3 last year, skyrocketed to $147/share on Tuesday, then $380 on Wednesday, before selling off and closing at $193 on Thursday. But the price decline on Thursday came only after popular brokerage sites such as Robinhood blocked customers from buying more shares. 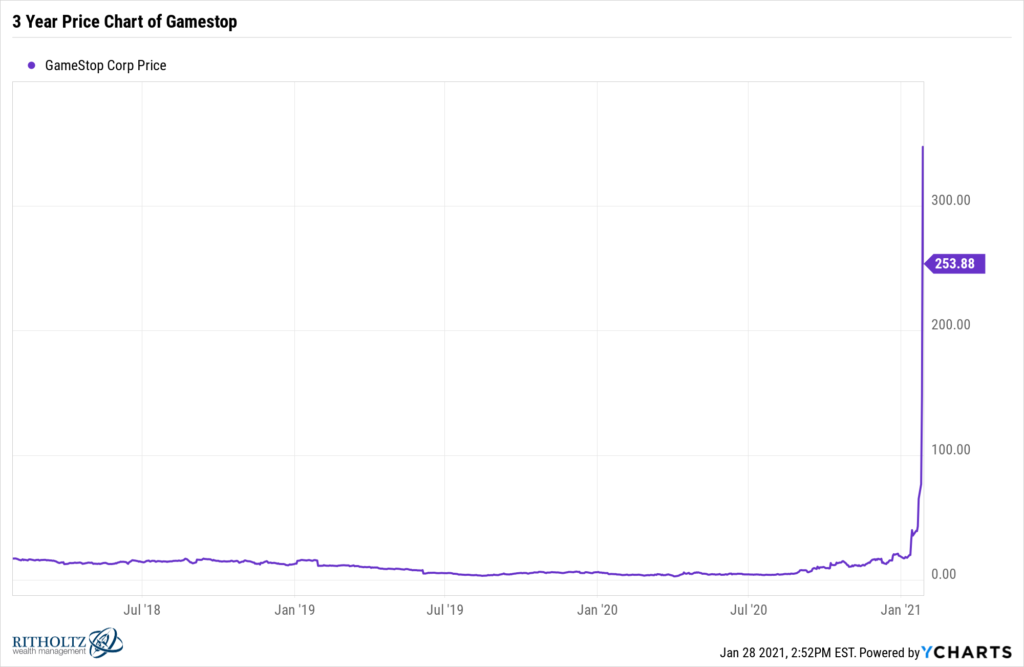 This is so much more than a story of how traders colluded on internet chat rooms to pump the stock price of GameStop. It is also a story of the masses coming after the wealthiest 1%, personified by hedge funds with short positions in GameStop. One hedge fund, Melvin Capital Management, received a $2.75 Billion cash injection from hedge fund giant Citadel and Steven Cohen’s Point72 Asset Management to help the fund stay afloat. Melvin’s friends tried to help bail them out in return for an equity stake.

It is not clear what Melvin Capital’s final fate will be, but the fund reportedly covered its short position on Wednesday at a huge loss. Steven Cohen’s Point 72 is rumored to be down 10-15% year to date. And on Thursday, hedge fund billionaire Leon Cooperman appeared on CNBC and said;

The reason the market is doing what it’s doing is, people are sitting at home, getting their checks from the government, basically trading for no commissions and no interest rates. … This fair share concept is bullshit, it’s a way of attacking wealthy people.

Whew. And there you have it.

On Thursday, everyone from Mark Cuban, to rapper JaRule, Representative Alexandria Ocasio-Cortez, Senator Ted Cruz, David Portnoy from Barstool Sports, and even billionaire Bitcoin investors the Winklevoss twins were tweeting about Robinhood blocking new purchases on GameStop shares. The general consensus was that Robinhood has cut off capital market access for the little guy to save the hedge funds. I am not quite sure that is the entire story. I suspect there were major disruptions rippling across financial institutions as a result of GameStop’s trading activity.

It there anyone out there who still doesn't think the system is rigged against the little guys?

Another thread that makes this entire episode possible is the rise of commission-free trading. Robinhood started the trend, eventually forcing discount brokers Charles Schwab and TD Ameritrade to drop trading commissions in the fall of 2019 and merge. This caused a massive increase in both brokerage account opening and trading activity. Covid-19 stay-at-home orders and the cancellation of sports in the spring caused sports bettors, including Barstool Sports founder Dave Portnoy, to take up day trading as a hobby. Multiple rounds of stimulus checks may have even thrown more gas on the fire.

But nothing is ever “free”. How does Robinhood make money? It’s called order flow. High frequency trading firms, such as Citadel, will pay Robinhood for the ability to execute their customers’ trades. That’s because high frequency trading firms can make a tiny fraction of a penny on each trade. The more trades, the more tiny profits. The majority of Robinhood’s revenue come from hedge funds like Citadel. And now we have a money trail with real conflicts of interest leading to Robinhood limiting trades in GameStop on Thursday.

If it’s free, you are the product. @RobinhoodApp

While we have no idea how the GameStop story ends, I am pretty sure future students of finance will study this incident the same way I studied the collapse of Long Term Capital Management and the Thai baht currency crisis. A crowd-sourced pump and dump scheme to break “the suits” (as the Reddit bros call hedge fund managers) is definitely something new. There are calls for new regulation, but I have a feeling the current laws on the books make the actions of the WallStreetBets crowd illegal. I shudder to think how angry the mob will be after some of them are prosecuted. But hey, YOLO!