If there is one super hero in my field, it was Jack Bogle. In 1974, Mr. Bogle presented a revolutionary idea to the board of his former employer Wellington. He suggested that their mutual funds should be owned by the investors of the fund and not have outside owners seeking profits. Wellington rejected his proposal, and the next year he founded Vanguard. Over its 40+ year existence, Vanguard has brought low cost investing to everyone. Today Vanguard manages over $5 trillion and is the world’s second largest asset manager.

Just four days before Mr. Bogle’s death, I spoke about the 1974 Wellington proposal on Market Moment, our daily flash briefing on Alexa. You can listen to it here:

Enable Market Moment on your Alexa device here. I give the update every Thursday.

The father of the index fund was panned and criticized at first. Index investing was labeled “unAmerican” even “Marxist” by some. The funds raised to start the Vanguard 500 Index fund fell dramatically short of expectations. Today the fund is the largest in the world at $250 billion in assets.

Jack Bogle could have become a billionaire off of Vanguard’s success, but instead he believed that the investors in Vanguard funds deserved to keep as much of their returns as possible. The company has always run its funds at cost and passes along savings to the investors.

Recently, Mr. Bogle took up the torch for improvements needed in corporate governance of public companies. He published a letter in last fall’s Financial Analyst Journal and an op-ed in Wall Street Journal in late November. He must have worked until the last day possible. Despite a lifetime of heart problems, it was cancer that claimed him.

I missed my one chance to meet Jack Bogle, founder of Vanguard, arguably the man who had the greatest impact on investors in my lifetime. I was a panelist at the CFA Annual Conference in Philadelphia two years ago. He was a key note speaker. All speakers were invited to a dinner held after the first full day of the conference, and I signed up to attend. That day I made a split second decision to attend the Phillies game with my friend, Jeremy Schwartz of Wisdom Tree.

I have attended many speaker dinners at conferences, and generally the famous keynote speakers are not there. I wrongly assumed this dinner would be filled with c-list speakers life myself. I never imagined Mr. Bogle, who rarely left Malvern, would be going to that dinner. I was wrong, and I missed my only chance to meet him in person.

In October 2015, I was invited to visit Vanguard’s main campus in Malvern, PA. At the very height of fall foliage I rode from the Philadelphia airport to Malvern among the most glorious yellows and oranges I’ve ever seen. I stayed at the quaint, Desmond Hotel where a goody bag included my favorite coffee cup bearing the Vanguard logo.

The next day, I filmed a few videos for the advisor section of their website. Vanguard has a full television production stage on campus and a resident makeup artist on staff to get you camera ready. Afterwards, I visited the floor where the bond traders and portfolio managers handle $1 trillion in fixed income funds. Outside the main building, I snapped this photo of John Bogle’s statue in the bright, crisp October sun. But I didn’t see Mr. Bogle. 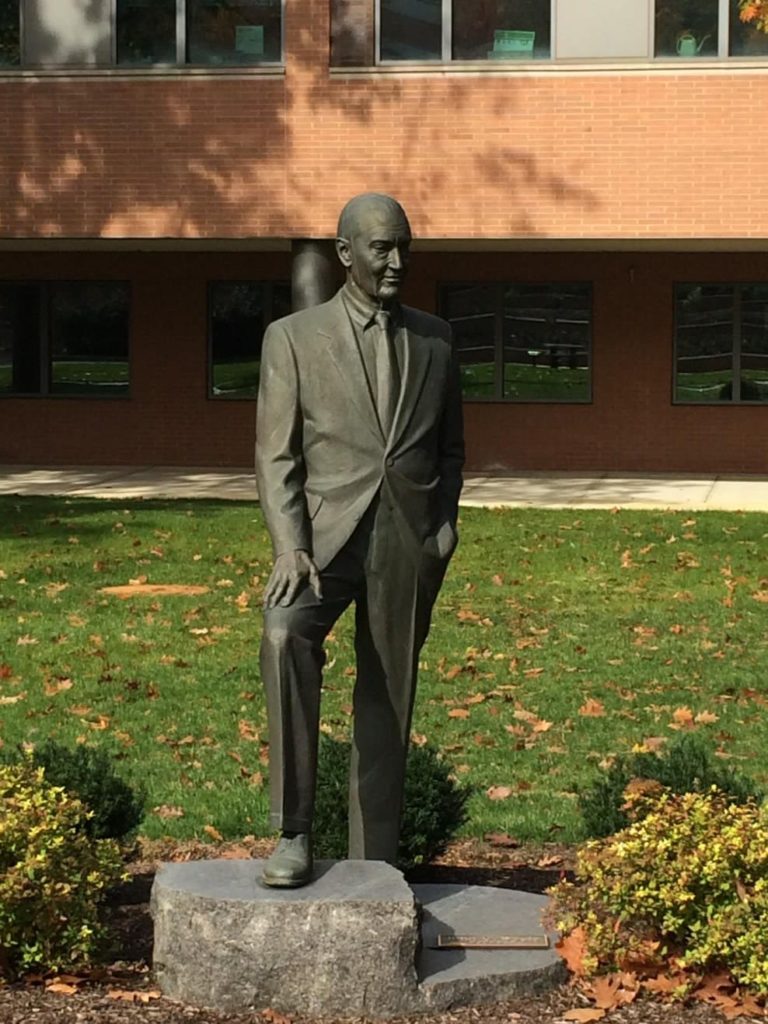 We have lost a titan, an icon, and a great man. Rest in peace Mr. Bogle. You will not soon be forgotten.