Lately, I am seeing a lot of “lies, damn lies, and statistics” floating around about everything from coronavirus, to the markets, to police brutality. It’s a good reminder that most Americans do not live in datasets like I do.  Most are unaccustomed to finding denominator blindness, cherry-picked data, and the misuse of averages. Luckily, there’s a handy little primer I recommend called How to Lie with Statistics. It’s a short read that will serve you well in deciphering the numbers, facts, and figures you read and hear on the news.

Coronavirus cases and deaths in the U.S. are on the decline. Now I am no epidemiologist, but it’s not hard to decipher that if the major population centers and earliest hard hits areas of New York, Chicago, Detroit, and California are on the decline, you will see a declining new case number for the U.S. as a whole. But that does not mean there are not significant outbreaks, some alarming, in certain corners of the country. After last week, it’s getting hard to argue that new cases nationwide are on the decline. 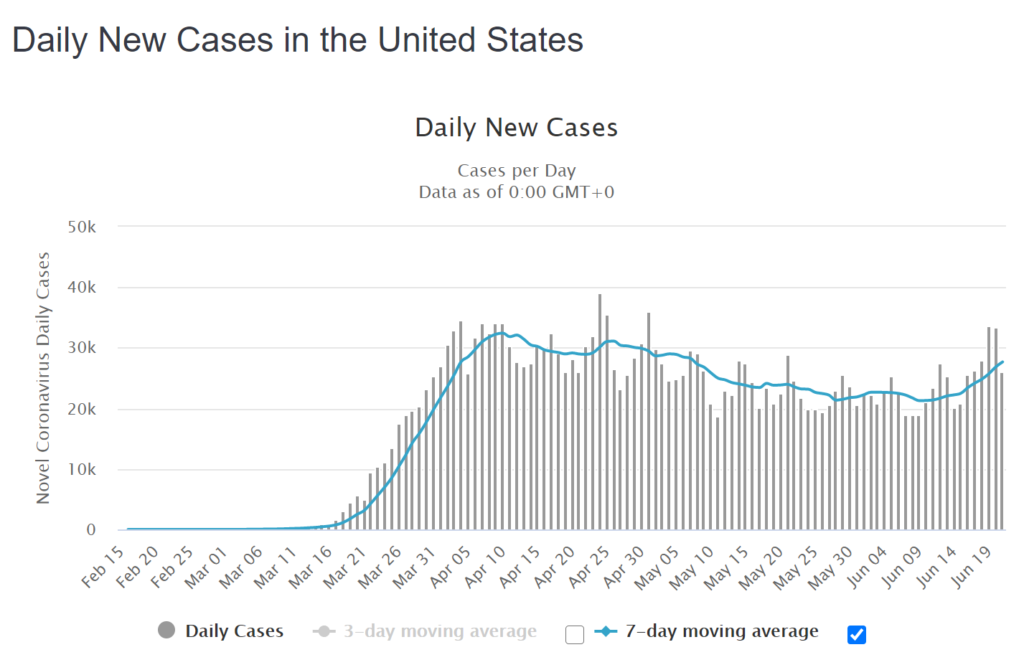 The good news is that the number of deaths per day from Covid-19 do seem to be in a downtrend. But states like Florida, Arizona, and Texas may be in the early stages of a their first wave, having delayed their spikes with early closures in March and April. This disease takes more than a month from infection to death, which is excruciatingly slow to watch in real time. Most places have been “open” less than six weeks. This decline in daily deaths may only be showing us the impact of the time most of the country closed down. I hope I am wrong. 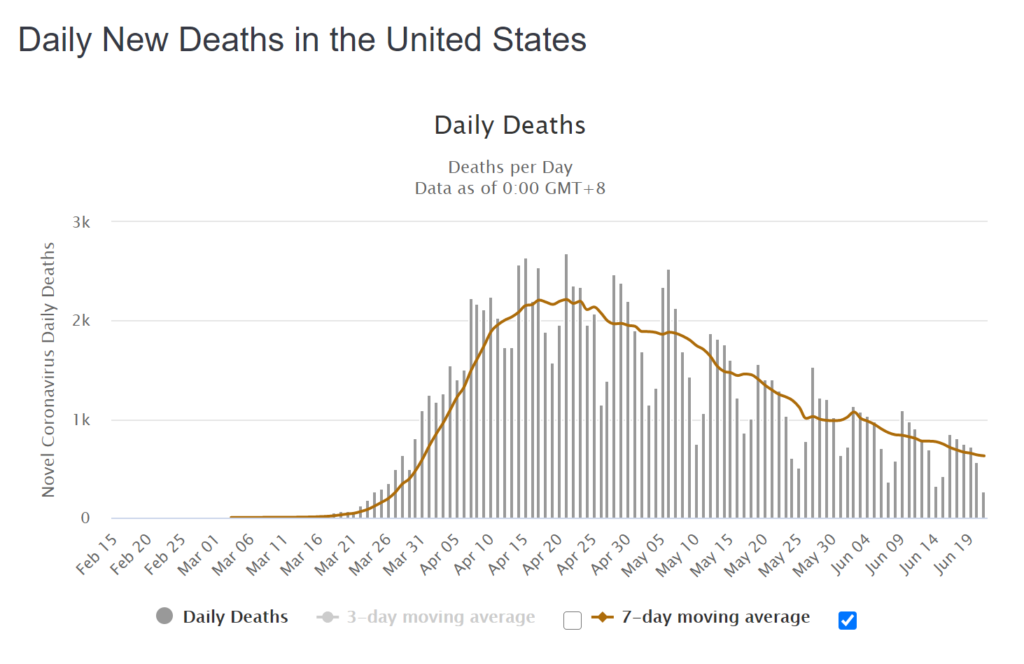 Sitting in an early hotspot, New Orleans, I can tell you that Covid-19 is still here and showing no signs of going away. We successfully suppressed transmission of the disease for almost two months, before a group of high school seniors rented AirBnB’s to throw graduation party ragers. Between those parties and more than 100 cases linked to reopened bars in Baton Rouge, we are waiting to see the damage from these super spreader events.

It is way too early to let our guard down about Covid-19. Don’t let these “damn lies” be the death of you or an elderly loved one. I am laissez faire in a lot of ways, but coronavirus is not one of them.

Police kill more white people in the U.S. each year than black people. The denominator blindness in this statement is painful. This is a true, but it hides the fact that black people make up 13% of the U.S. population yet account for 24% of police killings. A black person is three-times more likely to be killed by police than a white person.

It ain’t a secret don’t conceal the fact, the penitentiary’s packed and it’s filled with blacks. – Tupac Shakur

While black incarceration rates are on the decline, blacks and hispanics make up a disproportionate number of the prison population. Blacks are 33% of the adult prison population, almost three times their overall U.S. population percentage. Before you point the finger or claim these are the people committing the crimes, ask yourself if you’ve ever seen a white youth escape a drug charge or a DUI with probation or a slap on the wrist. Those initial encounters with the justice system send young people of two very different paths. My home state of Louisiana incarcerates more people per capita than many western democracies combined. Are there really that many more criminals in Louisiana? Perhaps a few, but not to this degree. 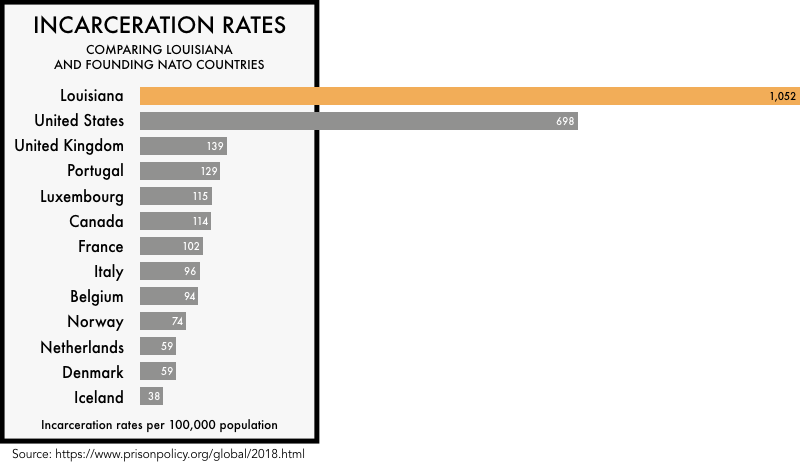 The stock market doesn’t match the real economy. This one is true. I have news for you. The S&P 500 Index is not a representation of your local economy. It never was. The top 5 companies in the S&P 500 Index – Microsoft, Apple, Amazon, Facebook, and Google – represent 21.25% of the index. While the travel and service industries are in shambles, Americans have found other places to spend their money, and these tech giants are the winners. The sad part here is that thousands of restaurants and small businesses will file for bankruptcy and the market may go higher. There will be more public companies filing for bankruptcy, following in the footsteps of Neiman Marcus, Hertz, J Crew, JCPenney, Pier 1 Imports, and Diamond Offshore Drilling. But their combined market caps may not be enough to make a dent in the major averages.

If you’ve fallen for some of these misleading statistics, don’t beat yourself up. Lying with statistics has been a persuasive tactic ever since humans created the numeric system. Just be careful from now on. Anytime you hear, read, or see a statistic, your antenna should immediately go up. With time and attention to detail, the curious mind can adapt and learn to ask the questions that uncover the reality behind the numbers. A good rule of thumb – just because there are numbers involved, it’s not the gospel.