Last Sunday we witnessed the most obvious and consequential officiating blunder in American football history. The New Orleans Saints, playing for the NFC Championship at home in the Superdome, were tied 20-20 with the Los Angeles Rams with less than two minutes remaining in the game. Drew Brees, the quarterback with the most career passing yards and completions, was leading the Saints down the field. The goal was to run out the clock and score a touchdown or kick a field goal. And then it happened…

Rams cornerback Nickell Robey-Coleman was, admittedly, beat by Saints receiver Tommylee Lewis and intentionally committed pass interference to prevent a touchdown. Not only was it pass interference, the hit resulted in helmet to helmet contact, a penalty in its own right. Everyone in the Superdome saw the foul and immediately reacted, except for the two referees standing within five feet of the play. No flag was thrown. The Saints kicked a field goal with too much time remaining, and the rest is history.

A correct call would have given the Saints another set of downs inside the 10-yard line. The Saints would have run off most of the game clock and scored either a touchdown or an easy field goal. It was the end of the game.

Players and fans are rightfully upset and feel robbed. A local businessman purchased billboards in Atlanta, near the site of the Super Bowl, that read “Saints got Robbed” and “NFL Bleaux It”. The Mayor of New Orleans and Governor of Louisiana wrote letters to NFL Commissioner Roger Goodell requesting rule changes and retribution. Senator Cassidy made a dramatic presentation on the floor of the U.S. Senate during the height of a government shutdown. The New Orleans City Council passed a proclamation calling for rule changes. I am a member of a civic organization that signed a letter on behalf of the New Orleans’ business community to Commissioner Goodell. It was Fedexed to NFL Headquarters in New York and to the hotel where Goodell will stay in Atlanta for the Super Bowl. 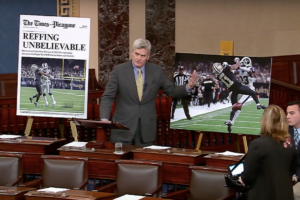 The call was wrong, but as I have had time to digest the unfairness of it, I keep thinking about the rest of that game. The Saints had two more chances to win. First they needed to stop the Rams from getting in to field goal position at the end of regulation. Then they won the toss to get the ball first in overtime. Brees threw an interception.

I am reminded of something Josh wrote in 2018 about yards after contact, the most important statistic in football. The Saints had a chance to overcome the most egregious officiating error in history, win the NFC Championship, and advance to the Super Bowl. But it didn’t happen.

Life is unfair. Some of us will retire at the start of the next bear market and experience declines in our portfolios at the absolute worst time. Others missed the great bull market of the 1980’s and 1990’s because we were too young to earn money to invest. A lot of hardworking people lost their homes to foreclosure during the Great Financial Crisis. We cannot control these unfortunate, unlucky events. It is how we react to adversity that matters.

My fellow advisors at RWM started a book club this year. Our first book, Endurance, about the failed Antarctic expedition of Ernest Shackleton in 1915, describes an incredible struggle for survival by a crew of men stranded in the frozen Antarctic Sea over one-hundred years ago. The book broadened my understanding of the limits of human capability against impossible circumstances.

Life will deal us all an unlucky hand, and we must prepare mentally to absorb it and persevere. Humans are capable of the most extraordinary feats; climbing Mount Everest, landing on the Moon, escaping ice floes in the Antarctic sea, and moving past being robbed of a trip to the Super Bowl. I am inspired by the gracious words shared by Saints owner Gayle Benson (the first woman to own an NFL and an NBA franchise) and by quarterback Drew Brees.

Whenever my almost two-year old son falls down, I always make sure to tell him it is important to “always get back up”.