Here is one of my favorite pieces of career advice; “No one is going to look out for you but you.”

Women whisper this to other women working longer hours than their male colleagues for less pay. Young professionals rumble about politics of the old guard keeping them from the next promotion. Whatever the reason for passing this advice, it’s a good reminder to take your fate in your own hands. You are the only one who has your best interests in mind at all times.

Which leads me to a quandary I’ve been pondering; the looming retirement crisis. Most Americans don’t earn enough to save for retirement. This is a problem for all of us because 10,000 baby boomers are retiring each day, and they don’t have enough money to live on for the next 20-30 years.

The problem is getting worse. Millennials are earning less than their parents were at the same age. Now they are facing higher taxes to pay for the increased burden on our social safety net; Social Security, Medicare, and Medicaid.

How did we get here? 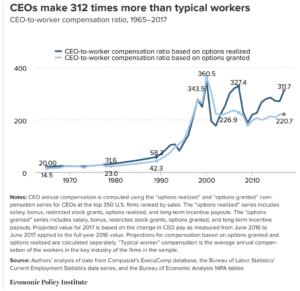 As Michael Batnick pointed out in this epic post, real income is stagnant for the majority of US households since 1980. Income is flat, but the cost of living continues to rise. College tuition, health insurance, childcare, and housing are all much higher than they were for the prior generation.

The free market capitalist in me says, so what? The market will pay the clearing price. This is the value of the average CEO and the average worker today. I do not advocate that government regulation is the appropriate way to solve this dilemma.

“CEO compensation systems – especially in the United States – suffer from two fatal flaws. Compensation is based importantly on comparison with peers and typically depends far more heavily on stock prices than on intrinsic corporate values. When a board finds that its own CEO’s pay reposes in the fourth quartile among his peers – “our CEO is better than that!” – it is all too likely to raise compensation up to the first or second quartile. This leap, of course, drops another CEO into the fourth quartile. Of course!

And so, the cycle repeats, ratcheting onward and upward as the years pass, almost always on recommendation of an ostensibly independent executive compensation consultant.”

Where are the stockholders? Bogle writes on that institutional money managers own 73% of shares in US common stock. Thus far, mutual funds, pension plans, and other institutional owners have not exerted their power over corporate boards, generally voting in favor and board proxies and rarely submitting shareholder proposals.

Reducing CEO pay does not solve the problem if it does not result in pay increases for the average worker. Historically, labor unions have filled the role of fighting for higher wages. If you haven’t read Upton Sinclair’s The Jungle, it explains the birth of the labor movement. Unions were a free market response to the mismatch of power between labor and capital. Today these organizations are fraught with flaws, often misusing the funds of their own members for the benefit of leadership at expense of the member.

Earlier this month the PBS program Frontline featured Dayton, OH in an episode called “Left Behind America“. Dayton is one of many rustbelt American cities struggling to remake its economy after the loss of manufacturing jobs and the Great Recession. This once bustling city was the birthplace of the Wright Brothers, the first cash register, and numerous patents. Today more than one-third of Daytonians live below the poverty line, and it’s crown jewel, National Cash Register, Corp (NCR) moved its headquarters to Atlanta.

We need coordinated planning to prepare our workforce for 21st century jobs. Jobs in technology and healthcare pay living wages with benefits. And we should not forget the trades; plumbers, electricians, mechanics. These are high paying jobs that will never be shipped overseas. With gridlock in Washington, we are not likely to see any forward thinking from the federal government. So we are left with no one but ourselves to find a solution. No one but you is going to look out for you.