This weekend, I attended an event where Gayle Benson, owner of the New Orleans Saints and the New Orleans Pelicans, gave the opening keynote address. Normally, I do not schedule events at 8:30am on a Saturday morning, but for Gayle, I made an exception. It was the 5th annual Tulane University, Women Making Waves conference, and the CFA Society of Louisiana sponsored the event. As I traipsed across Tulane’s campus that morning, I passed a few students walking home in last night’s clothes. Ah, to be that young and carefree again.

If you don’t know her, Gayle was the third wife of Saints and Pelicans owner Tom Benson, who hand selected Gayle over his granddaughter Rita LeBlanc to assume ownership of the teams at his passing. Mr. Benson died last spring. In her first year as owner, the Saints were robbed of a Super Bowl appearance by the infamous no-call of a pass interference penalty in the NFC Championship game. The Pelicans are in disarray, with star player Anthony Davis requesting a trade that never materialized.  Her first year as a female owner of both an NFL and NBA franchise would not go quietly into that good night. 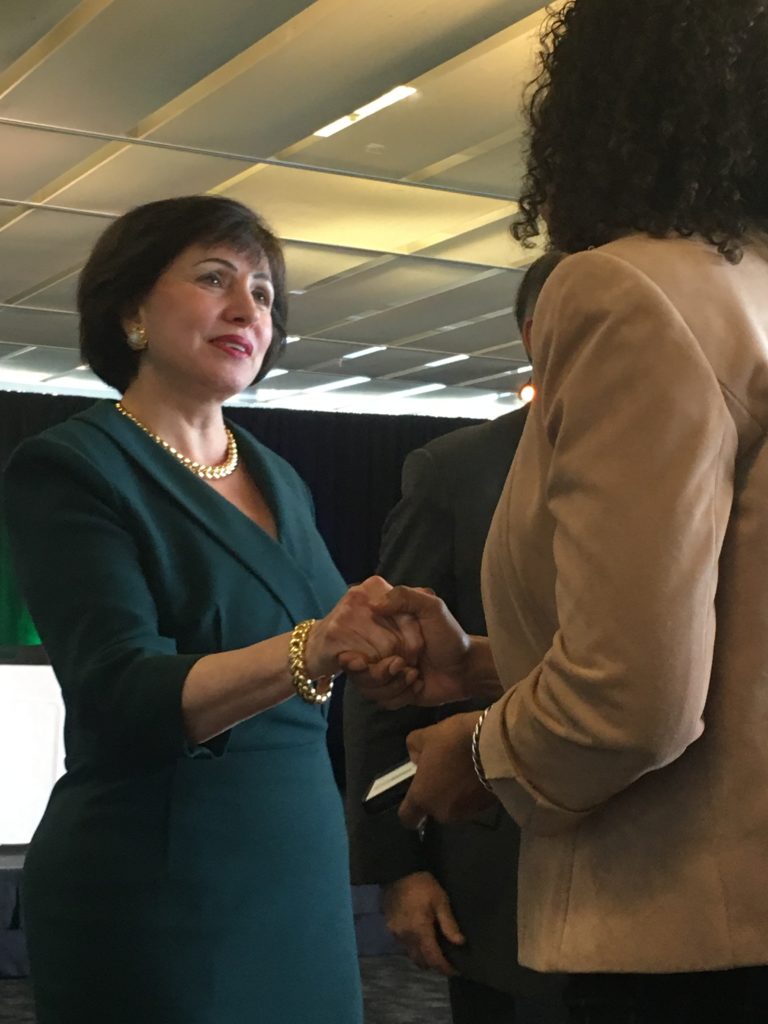 Gayle is a class act. She spoke to anyone in the audience who approached her. Her Chanel handbag and shoes matched her green dress.

Here are my key takeaways from Gayle’s remarks. I think these are pearls of wisdom attributable to any career or life.

Hard work and determination are everything. Gayle began by explaining that the foundation for her work ethic was laid before she married Tom Benson and ran a small interior design business. She was determined to “never lose an opportunity because someone worked harder than me”. I think this is important advice in today’s ‘work smart, not hard’ superficial atmosphere. Yes, be smart about your work, but don’t be afraid to put in the hours. She shared a favorite quote of her late husband:

Failure is a part of life and of business. Teams lose games they shouldn’t lose and sometimes they are simply beat by the opposing team. And sometimes, they lose the game because officials fail to make the call on an obvious penalty. But we should expect failure and seek to learn and grow from it. Gayle said the NFL discourages owners from criticizing the league or the officials. But she felt obligated to the fans and to the team to speak out on the no-call. Her words illustrate her diplomacy and grace. It’s what we do after a loss or a failure that matters.

Honesty is the single most important characteristic for success. This includes, most importantly, honesty with yourself. Gayle explained that the New Orleans Pelicans have not created a culture that produces consistent wins. This is why she parted ways with the General Manager and has hired consultants to evaluate the entire organization. She knows it will mean letting go of people she respects but this is her responsibility to the fans. Being honest that your current path is not working saves precious time and resources. It’s also one of the hardest things in life to do.

Send handwritten notes. Gayle said her friends laugh at her because she sends written responses to their thank you notes. She said she carves time our every single day to write to people – to thank them or to acknowledge an accomplishment. I could not agree more. Even though my handwriting is atrocious, I do my best to send written thank you notes. There is nothing better than receiving a handwritten note in the mail. I must give a shout out to fellow advisor and blogger Paul Karnes who has written me several congratulatory notes over the years. I have kept them all.

When a door opens for you, be sure to leave it open for the next person. This was Gayle’s plea to women and minorities to pull the next in line along with them. She said diversity and inclusion is not only morally right, there’s a business case for it.

After her remarks, Gayle graciously posed for photos with any woman in the audience who wanted one. Warren Buffett said that money doesn’t change who you are, it magnifies who you are. It will be fun to watch Gayle leave her mark on sports and the city of New Orleans now that it is her time to lead.