Tropical Storm Barry is slowly approaching landfall in southeast Louisiana, and New Orleans is expecting between 10-20 inches of rain on Saturday. Two days ago, flash floods dropped 8 inches on downtown New Orleans in less than two hours. Many streets were impassible and low lying businesses and homes took on water. The pumps that keep our streets from flooding in normal rain events could not keep up.

Meanwhile the Mississippi River has been above flood stage since October, the longest recorded high water event on record. High water creates dangerous conditions for the people who make their living transporting goods along the river. The length of this flood stage is testing federal levees designed to combat the 1927 flood. The Bonnet Carre Spillway, which diverts river water into Lake Ponchartrain to the north of the city, has been open twice this season, a first in its 88 year history. Storm surge from Barry could push the river as high as 20 feet, overtopping the levees in some places.

If you are unfamiliar with the topography of New Orleans, the city is literally surrounded by water. There is only one way to drive in to the city without crossing a river, lake, or the spillway. The snake-like, winding river you see to the south on the map below is the end of the mighty Mississippi River. Rainwater and runoff from Minnesota, Wisconsin, Iowa, St. Louis, Kentucky and more flows past our homes. The river is currently cresting 16 feet above us, held back by the strongest levee system in the world. Lakes Ponchartrain, Maurepas, and Bornge to the north, west, and east have already taken excess water from the river. Storm surge from Barry will push more water into both the lakes and the river this weekend. 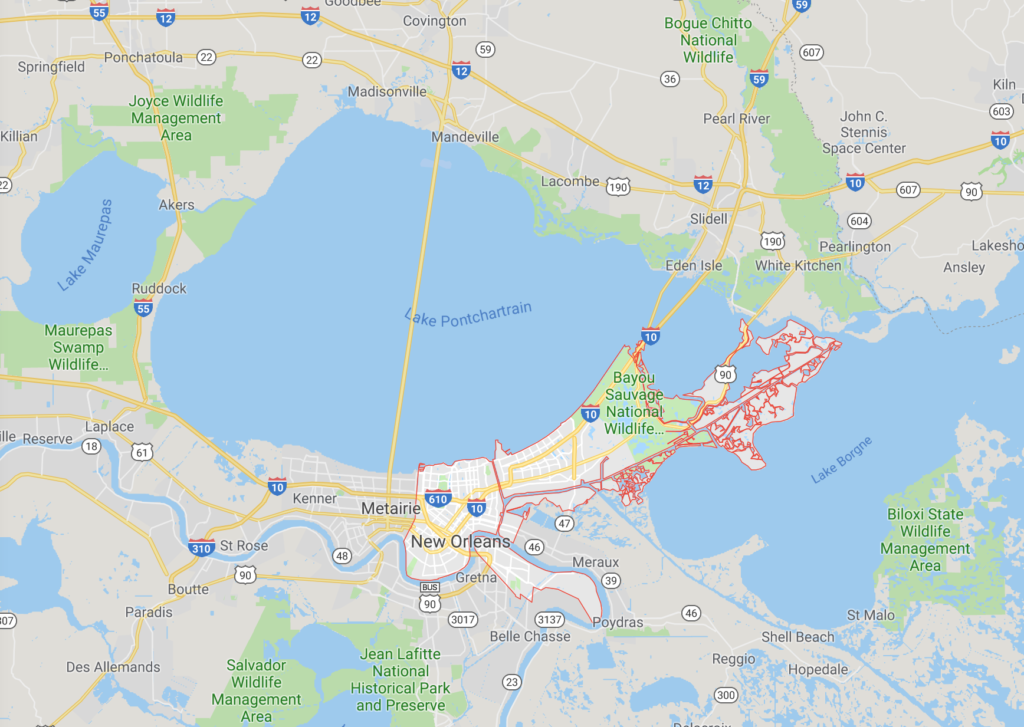 There was once a time when a Tropical Storm was a non-event for New Orleans. Top off the car with gas, secure trash bins and outside furniture, stock up on bottled water, fill the bathtub (to flush toilets), charge your batteries, crack open a bottle of wine and wait for the storm to pass. Lately, even minor storms are giving us major trouble. A flash flood in August of 2017, unrelated to any tropical system, revealed major problems with the city’s drainage infrastructure. Today, rainfall is the greatest concern, where historically, wind and storm surge were the largest threats from hurricanes.

Bear markets remind me of hurricanes.

Each market downturn is different, and there is no way to predict how the next one might hurt you. But, like hurricanes, the key to surviving bear markets is to prepare in advance. Your first line of defense is to make sure you are taking the appropriate amount of risk in your portfolio. This entails knowing your personal tolerance for risk, and I mean really knowing your personal tolerance. If you cannot handle a 20% drop in the value of your portfolio, you should seriously limit the percentage invested in stocks, which can easily decline 30-40% in a bear market. The key to earning the long-term average return of the stock market is your ability to stay the course when the storms comes. Those who sell when the market is down rarely get back in, resulting in a permanent loss of capital.

Risk and return are tradeoffs, however, so you need to know how much risk you need to take in order to accomplish your financial goals. This entails going through a financial planning process to quantify those goals and test a variety of scenarios using assumptions for inflation, sequence of returns, and volatility. While the target investment return in a financial plan is never guaranteed, it serves as a guideline for determining how much of your portfolio should be invested in stocks and bonds. Adjustments can be made along the way as your time horizon, cash flow needs, and market expectations change.

The other key to weathering bear markets is to mentally prepare for the next downturn. Although market declines are impossible to predict, investors can expect to ride out several over a lifetime. Since bear markets are inevitable, it makes sense to envision what a market downturn means for your portfolio, and quantify it in dollar terms. If your portfolio is larger today than it was in 2008-2009, a 20+% decline from here will be more dollars than last time. Go ahead and calculate how much a 10%, 20%, 30% drop in your portfolio would be. It will be less of a shock to your system when it happens. I always remind clients that the next bear market is coming. I don’t know when, but it will come.

Today, I’m watching from afar in Asheville, North Carolina, as neighbors batten down the hatches and prepare for Tropical Storm Barry. If the worst rainfall predictions are accurate, Barry will be a major flooding event. Low lying areas surrounding the city have issued voluntary evacuation orders. I’ve received countless emails from businesses, clubs, churches, and organizations regarding closures. Hopefully the worst case won’t pan out. But either way, New Orleans is resilient. This storm won’t beat us.