If I ask a group of 100 investors, “What is the most important assumption in a financial plan?”, I bet less than 10% would give the correct answer. Many believe it is the rate of return on investments. Others may say the withdrawal rate during retirement or the savings rate pre-retirement. All of these are important assumptions, but there is something else that eclipses each one … the rate of inflation.

You’ve seen it. Prices go up over time. What was the price of a gallon of gasoline when you began driving, or the cost of a can of Coke from the vending machine when you were a child? These are the little things. The costs of housing and transportation, two of the largest expenses in a household budget, have also risen. And some costs, such as medical expenses and college tuition, are rising even faster.

Americans are living longer but not necessarily working longer. This means that retirement periods are longer. Retirees today must plan for their portfolio to sustain withdrawals for 20 or 30 years. The overall rate of inflation in the U.S. has been low since the Great Financial Crisis, struggling to climb above 2%. The graphic below shows how many years it takes for inflation to cut the value of a dollar in half. I always like to turn this around and say this is how long it will take for your living expenses to double. 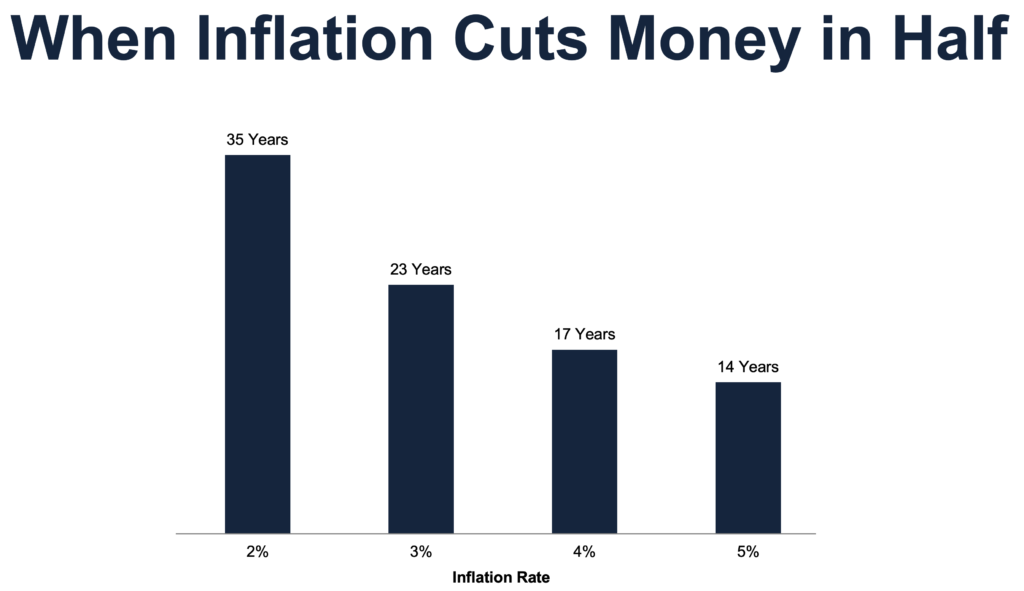 Even before interest rates dropped to zero, the dream of living on dividends and interest in retirement was impossible. Retirees need stock market returns to survive for multiple decades without a paycheck. But stocks are volatile, which makes many investors uncomfortable. Look no further than a 35% decline in stocks between mid February and the end of March earlier this year for proof. There are no simple solutions, no rules of thumb, that can prepare a retiree for such a dramatic drop in the value of their nest egg.

But like a frog in tepid water being brought to a boil, retirees face a more important risk in price inflation. Imagine trying to live on your salary from 20 years ago. You couldn’t, not without making majors changes to your standard of living.

The human brain is hardwired to react to immediate danger. Our ancestors lived to see another day when they ran away from something that looked like a lion. It didn’t matter if what they saw was actually a lion or not. Modern humans have the same urge to flee in our DNA. Our adrenal gland releases the hormone epinephrine, and we are off to the races.  When the stock market sells off dramatically, we want to get out of the way, sell, and remove the immediate pain. But what we fail to internalize is the longer term, less immediate, but very real, danger of price inflation.

Inflation is the single most important assumption in a financial plan. It’s the reason retirees cannot live on a ‘fixed’ income and will need stock market appreciation to keep pace with price increases. But with more than 45 million Americans already receiving Social Security retirement benefits, and 10,000 Baby Boomers turning 65 each day for the next two decades, I doubt than many of them are focused on the most important assumption in their financial plan.