The inaugural Wealth/Stack conference was held in Scottsdale, AZ earlier this week. After more than a year of planning and preparation, we executed what I think will become a can’t miss event for independent advisors in future years. Of course, the team at Inside ETFs did the heavy lifting with logistics and planning. Kudos to John Swolfs, Matt Middleton, Sovaida Noronha and team. You guys are true professionals, and it was a treat to work with you.

Here are my highlights and takeaways from the conference.

For the first time in my career as an advisor, I saw a meaningful number of women on stage and in the audience. Less than 20% of advisors are women, so when I say meaningful, I don’t mean that we were in the majority. On Sunday, I interviewed author and economist Allison Schrager about her fantastic book with a racy title – An Economist Walks into a Brothel.

Monday morning, I attended a breakfast session to highlight the new Female Advisor Network (FAN) and Women in ETFs (WE), which is celebrating its 5 year anniversary this fall. Nina O’Neal, founder of FAN was also a panelist on the opening day social media panel. The Female Advisor Network is a brand new membership organization focused on providing a community of support, mentorship, and collaboration for female advisors. It’s about time we have a place to call home. Jillian DelSignore, President of WE, explained that only 2% of their members are advisors, and they want more advisors to join. WE also has a speaker’s bureau aimed at increasing the number of women on stage at industry events. They have secured commitments from several large conference providers to ensure that no less than 30% of speakers are women. This is an exciting development. Many of the women in the room planned to join both organizations that day. It feels like there is a groundswell of momentum from women in our industry to be seen, heard, and acknowledged.

Simultaneous to the women’s networking breakfast, Elisabeth Kashner, Director of ETF Research at FactSet, was the only woman on stage for the lively Battle of the ETF Pundits debate. I was sorry to miss that session but heard a few punches were pulled. However, I did steal a few moments with Lis one-on-one in the hallway. She co-leads the Women in ETFs speaker’s bureau and group of women ready for rapid response to media requests. After so many emails and social media messages shared, it was a treat to spend some time face-to-face with her. 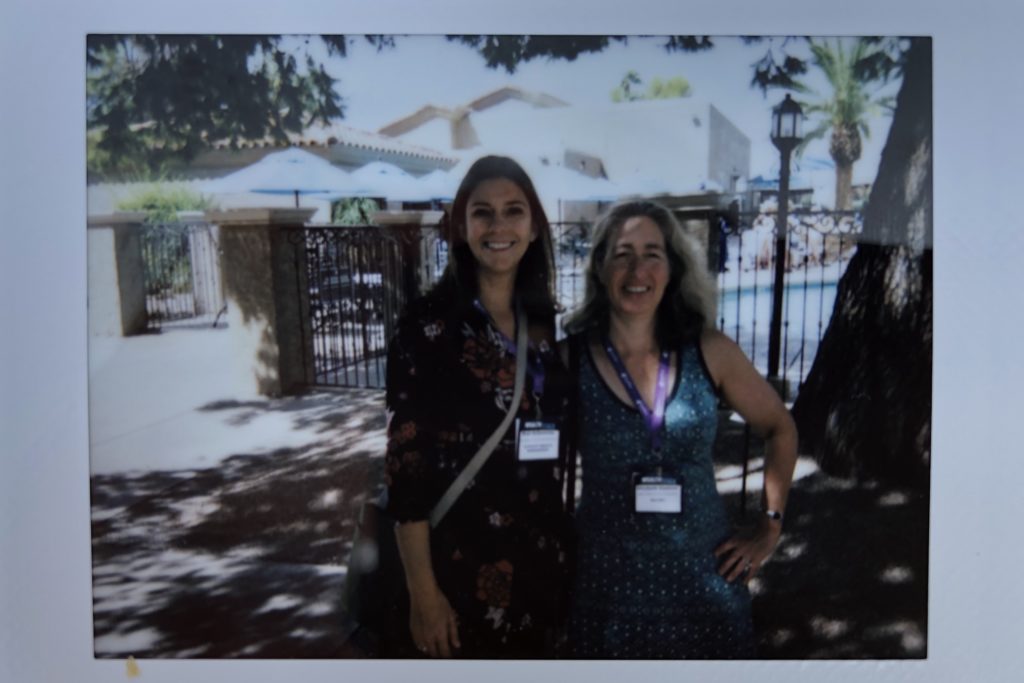 Me with Elisabeth Kashner from Factset and Women in ETFs

The Monday opening panel on Solving Your Tech Puzzle achieved gender parity with some of the biggest names in the independent advisor world – Teri Shepherd, President of the Carson Group, a $5 billion RIA, and Hiral Desai, VP Strategic Solutions at Apex Clearing. Later in the afternoon, Annie Massa of Bloomberg led a macroeconomic panel discussion that included Boston Private Wealth CIO, Shannon Saccocia. 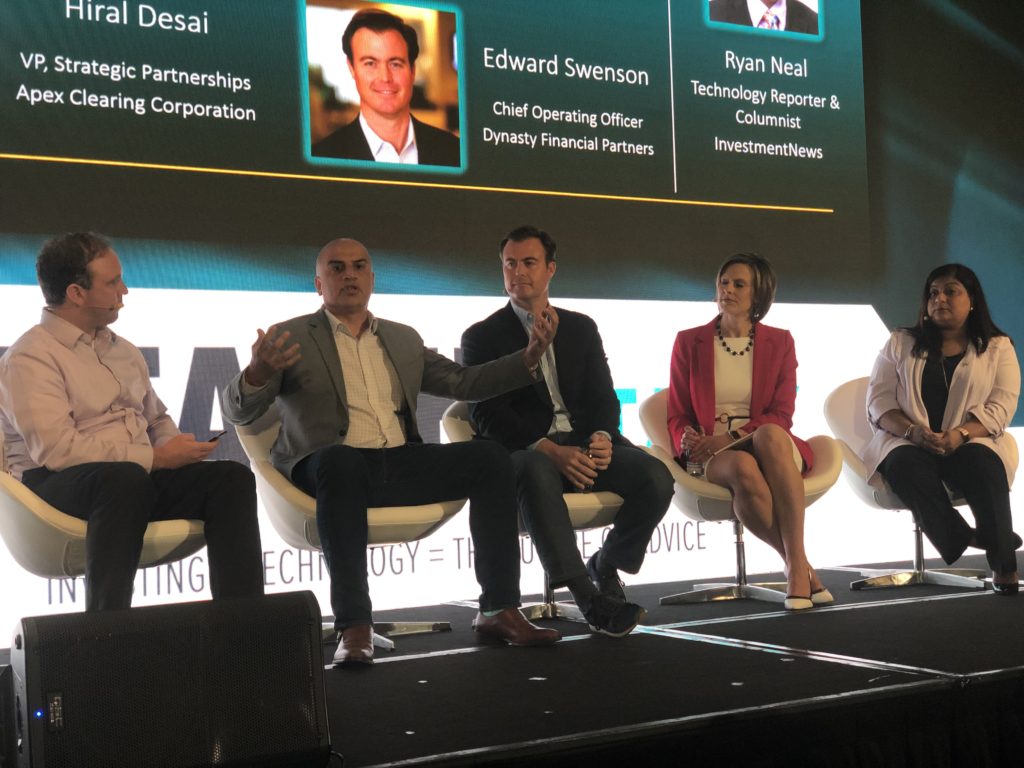 Tuesday morning opened with an all-female crew for the first full hour. Dani Fava, Director of Innovation for TD Ameritrade Institutional, blew our minds about the possibilities for applying Artificial Intelligence in our businesses. Companies like Amazon and Netflix already make recommendation based on prior customer behavior, so why won’t advisors do this in the near future? We are all tracked by our smartphones, even if we turn off location services, and this data will allow advisors to optimize when, how, and what topics to communicate with our clients. The future is bright, if not also frightening if applied in sinister ways. 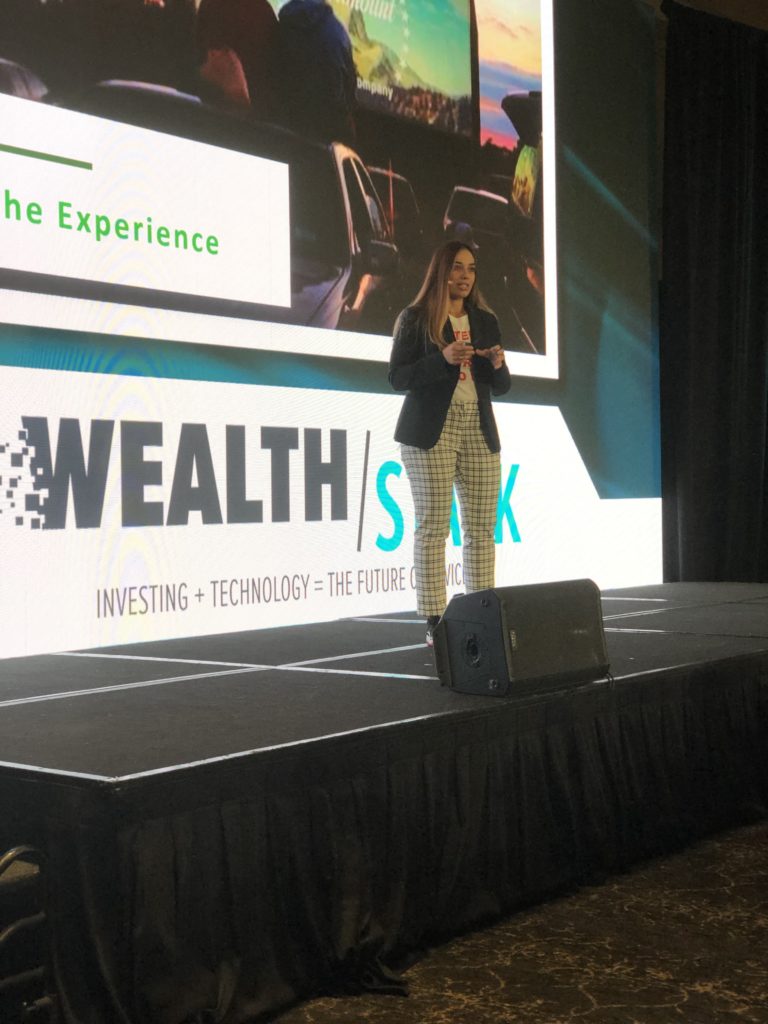 Next up was what might be our industry’s first WOMANel, an all female panel to discuss the Death of the Fiduciary Rule. My colleague, Dina Isola, who testified against the SEC’s Reg BI in Congress earlier this year moderated a discussion between none other than Barbara Roper, Director of Investor Protection at the Consumer Federation of America and Professor Nicole Boyson. Barbara explained that Reg BI does nothing to increase investor protection, instead relying on disclosure to mask conflicts of interest. Unfortunately, no one reads the disclosures, and the mere appearance of a disclosure documents creates unearned trust between investor of company. I was excited to hear Nicole, who I have followed online for years, discuss her research on the sales practices of dually-registered firms that are, in theory, supposed to act as fiduciaries. The grim truth is that hidden fees and kickbacks still incentivize firms to recommend inferior investment options to their clients.

The Biggest Names Were There – All of Them

Peter Mallouk of Creative Planning has never appeared at an industry conference. He sat with Barry for half an hour answering questions about how he grew his firm to over $40 billion in assets. The answer is not what you might expect. Creative’s growth was almost all organic, with very few acquisitions only recently, and no outside investors. He also revealed that he interviews every new hire at the firm (which now employs hundreds) because people, not tech, are the firm’s best asset. Mallouk added that his AUM growth did not include ultra high-net worth clients( $10M+) until the firm reached $25 billion. Add to it that Mallouk is only 49 years old, and I feel a fire lit under my feet. He is one of the most impressive RIA founders, and we were honored he chose Wealth/Stack for his first conference appearance. Did I mention he has a really saavy twitter feed?

United Capital founder, Joe Duran, made his first public appearance since selling the firm to Goldman Sachs in the spring. If you’ve never seen Duran speak, he is one of the most engaging, dynamic speakers out there. As he described how he built United to a $25 billion RIA by focusing on the client experience, it became apparent why he has twice built and sold businesses to Fortune 500 titans. He genuinely cares about people, what motivates them, and what makes them happy. United Capital’s success boils down to focusing on how they made their clients feel, and they made them feel happy. Duran opened up to Josh, who interviewed him, about the relief of no longer being solely responsible for hundreds of employees and thousands of clients through the sale. I’m always skeptical of a founder’s ability to stick around long after a sale, but I wouldn’t be shocked if he stays with Goldman owned United for a while. Goldman bought a tremendous asset in Duran, if they can avoid stepping on his toes. 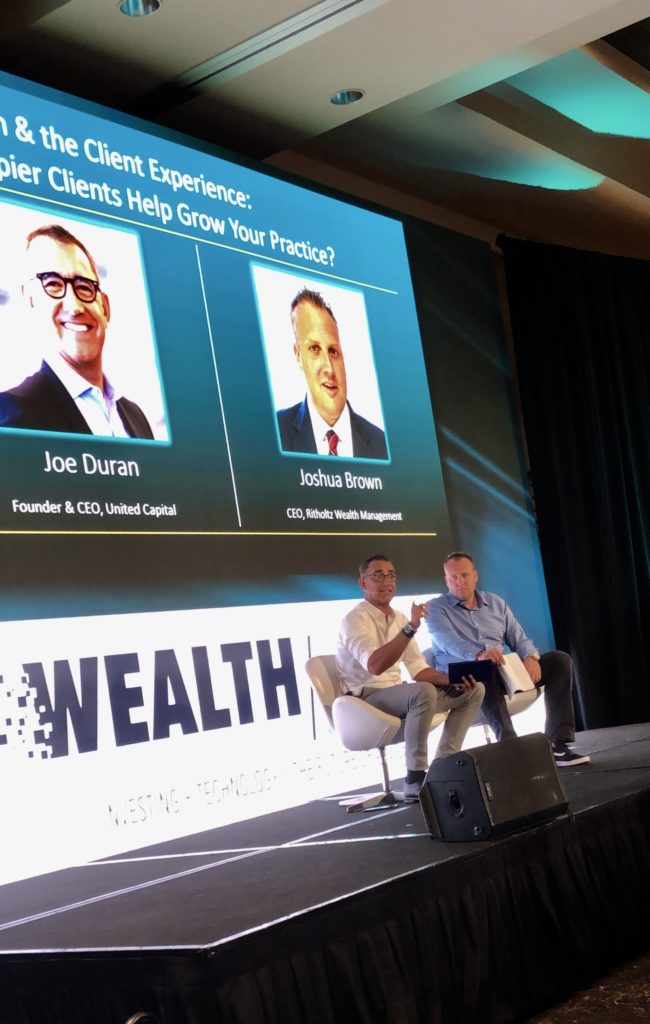 Shirl Penney, founder of the uber successful backshop and service firm for independent advisors Dynasty FP, gave a keynote on leadership. I sat next to him before he went on stage, and he mentioned having a 5:00am (8:00am on the east coast) call with his operations team. Someone asked him why he didn’t reschedule, and he said because he chooses “to lead by example”. He doesn’t expect anything of his team members that he is not willing to do himself. My favorite part of Shirl’s excellent presentation was when he talked about how he includes his family in his business decisions. Before bringing a new advisory firm in to the Dynasty family, Shirl insists on having dinner with the firm owner and spouse and his wife. He said his wife knows him better than anyone on the planet and is a perfect judge of who Shirl should choose to work with. Everything about Shirl exudes quality leadership, and I’m glad I had the chance to hear from him.

Wealth/Stack was designed to highlight advisor technology, and it did not disappoint. Just when I thought FinTech presentations were getting old and repeating themselves, several new and exciting things were unveiled at the conference.

Patrick O’Shaughnessy, CEO of O’Shaughnessy Asset Management, revealed a show stopper with Canvas, a fully customizable, direct-indexing tool for advisors. Advisors can use a combination of passive exposure (at a very low cost of 0.20%) and active share using OSAM’s depth of expertise, research, and implementation of factor-based investing to build globally diversified portfolios in a single managed account. Clients with concentrated positions in low basis stock can reduce exposure to an entire sector and take advantage of tax-lot level loss harvesting to shelter gains and sell more stock. Canvas removes the wrapper of the ETF or mutual fund and allows for super specific customization down to the single security, sector, and ESG factor level. I think Canvas is huge and will change the way advisors build portfolios for clients significantly.

I hosted a series of breakout sessions labeled the Tech Track on Monday afternoon. This sadly took me away for the new FinTech presentations and Daniel Crosby’s unveiling of Tulip, a software to analyze a client’s individual behavioral traits and biases. We know that helping clients overcome behavioral bias in one of the top ways advisors add value. I look forward to following up with Daniel to get more details on Tulip. Stay tuned.

In the Tech Track, a panel on the Client Experience moderated by Jim Pavia of CNBC included Altruist founder Jason Wenk. Altruist is attempting to completely disrupt the custody business by providing an all-in-one FinTech solution for advisors that includes trading and rebalancing software, client billing, performance reporting, and custody. Altruist will not charge trading fees on its custodial platform and aims to cut advisor technology costs dramatically. It’s a grand idea, that, if it works, could have profound implications for the future of our industry. Robinhood already offers free trades to individual investors, so why couldn’t Altruist do it for advisors? This is a company to watch.

The Tech Track breakout room was overflowing, so we had to move the final panel to the main stage. I think this cements the fact the Wealth/Stack was indeed a successful technology conference.

It never ceases to amaze me how many top notch people I have met through Twitter. I ‘met’ Josh Brown on Twitter and owe my job to the social media platform. Howard Lindzon mentioned the power of Twitter to connect people during his panel discussion on The Radical Future, even though, as he put it, the company cannot seem to figure out how to monetize this success. Wealth/Stack supplied more first-time, in real life meetups than I ever imagined. I am sure I will miss someone, but it was so  amazing to see:

I’d have to type the names of all 700 attendees to include all the old friends it was great to reconnect with this week.

I can’t wait to see what Wealth/Stack 2020 brings.