In case you haven’t noticed, there is a Presidential election this year. There is also a lot of talk about an undecided outcome on election day. In response to the Covid-19 pandemic, many states have expanded absentee ballots, added mail-in requests, and extended early voting. President Trump has made repeated remarks that the results of the election cannot be trusted because of expanded mail-in voting. Regardless of whether or not voter fraud is a concern, it is likely that we won’t know who will be President of the United States next term on the evening of November 3, 2020.

What does this mean for financial markets? It turns out, we have a recent example of a contested Presidential election. The outcome of the election between George W. Bush and Al Gore was not decided on election day 2000. Instead, Gore demanded a recount in the state of Florida, where the vote was very close. Remember those “hanging chads”? We didn’t know who won the election for over a month, when the U.S. Supreme Court decided Bush v. Gore on December 12, 2000.

Despite the uncertainty of who would be President the following year, the U.S. stock market didn’t sell off dramatically. Between election day on November 7 and the Supreme Court ruling on December 12, the S&P 500 Index was down -4.24%. 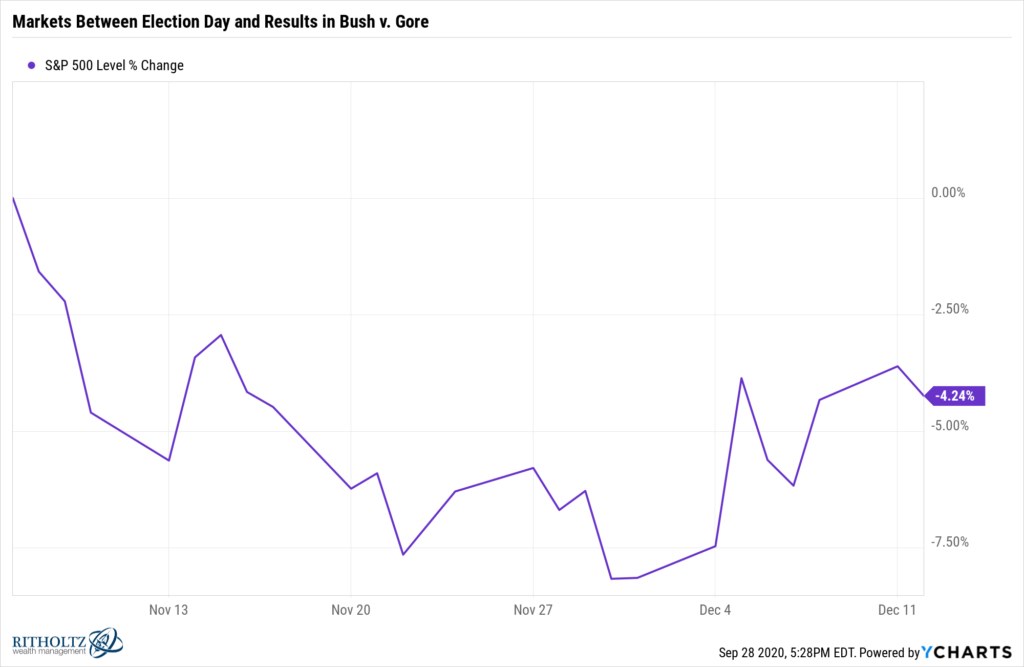 To put the markets in 2000 in context, remember that the burst of the dotcom bubble began in March of that year. By the end of 2002, the NASDAQ composite was -72% from its highs, and the S&P 500 Index was down -36%. In the chart below, the time between election day and decision day is unrecognizable. 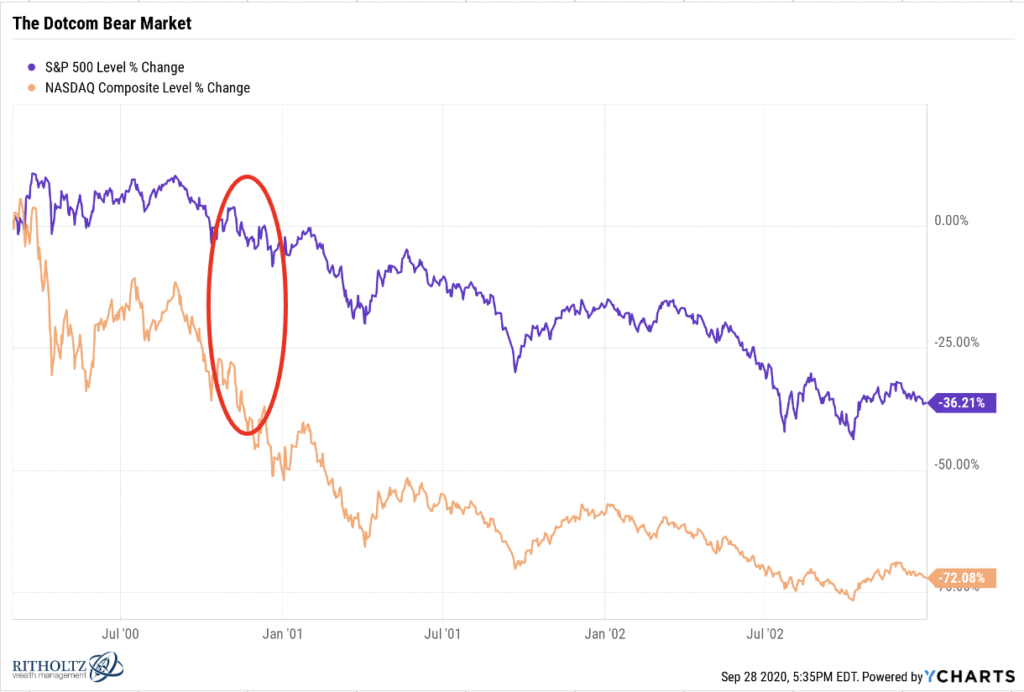 It may be tempting to assume that the outcome of the Presidential election in 2000 was no where near as important as the 2020 election. But make no mistake, Bush v. Gore was the top news story every day until the result was known. Of course, this is a statistical sample of 1, not exactly a robust data set to analyze. How the market reacted twenty years ago likely means nothing about how it might react in November.

Bush/Gore was the first Presidential election I voted in. I voted by absentee ballot, as I was away for my freshman year in college. But I’ll never forget finding out that my new best friend was from Broward County, Florida, the county that decided the election. She didn’t vote! I still haven’t let her off the hook for that one. Don’t ever assume your vote doesn’t count.

I am reminded of something Morgan Housel said on his book tour earlier this month. I am paraphrasing Morgan here –  the risk that really matters is the risk that no one is talking about. Everyone is talking about a contested Presidential election. If I were a betting woman, I’d bet that the market is prepared for a lengthy period of uncertainty on who will be the President for the next four years. One way or another, we will know by inauguration day.