Humans are notoriously bad at evaluating risk. Perhaps this is because there are two parts to calculating risk – the probability of an event and the magnitude of loss. It’s the probability that trips us up. We worry about shark attacks and terrorism when the chances of experiencing either of these risks is minute. In investing, time horizon also comes in to play, and we are really bad at analyzing risks that lie decades in the future.

This became crystal clear to me as I drove in to downtown Atlanta Monday morning. There was a large, electronic sign stretched across 8 lanes of I-85 that read:

Since I was driving, I did not snap a photo of the sign, but I found one from a local television station. 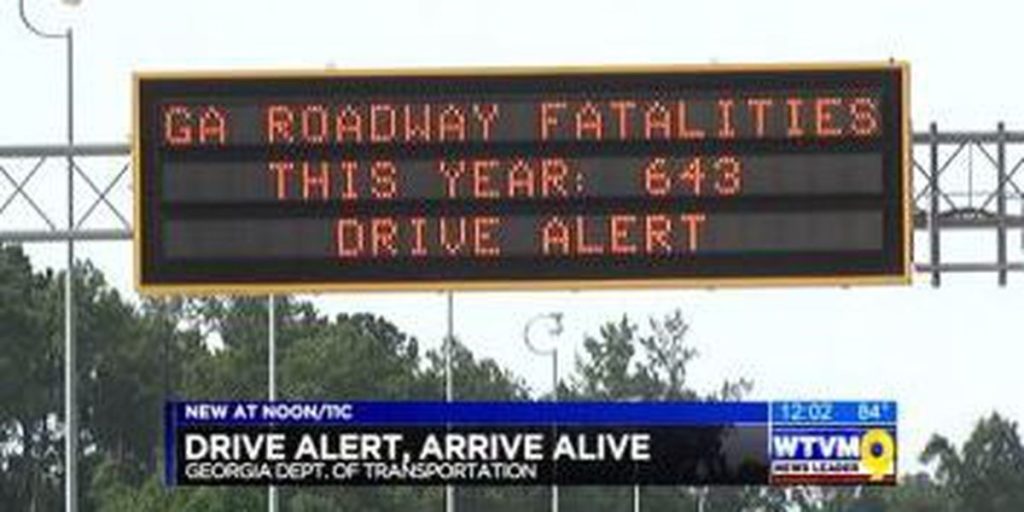 I couldn’t help but notice what an excellent behavioral nudge these signs provide. The riskiest thing most Americans do every day is drive our cars, yet we rarely perceive this activity as a risk. When riding in the car as a passenger, I often count the number of drivers who are looking down at their smartphones. If you don’t know, most of the drivers on the road with you are busy typing on their phones.  The state of Georgia alone is on pace to have 1,600 driving fatalities in 2019. In 2017, there were 37,133 driving related deaths in the U.S., while there were only 399 deaths worldwide related to airplane crashes. Which of these do you fear the most?

A couple of years ago, I was talking to my doctor about my fear of anesthesia. He offhandedly remarked – “the risks for anesthesia are very low, only 1 out of 200,000 patients experience any complication whatsoever. Now, I would understand if you had a fear of flying, but anesthesia is safe.” I immediately replied that there are millions of airline passengers each day! He conceded my win.

Investors are obsessed with market volatility, and for good reason. When stock markets decline, drawdowns as large as 30-40% are not uncommon. Many are shell-shocked from the two major bear markets experienced during the 2000’s – the Dotcom Bubble and the Great Financial Crisis. The first was long – the market declined for 2.5 years and did not recover its peak for 7 years. The second was deep – the S&P 500 Index lost more than 50% of its value in 18 months. I can feel investor anxiety about the next bear market as people nervously discuss the market ‘being so high’.

The bigger risk, arguably, is not investing in stocks at all. This is because less volatile investments – bonds, CDs, money markets – historically, have not kept up with inflation. As we live longer and retire earlier, it is not feasible to simply, buy bonds and live off the interest during retirement. Many investors will live 20-30 years after they retire. That is a very long time for an investment portfolio to sustain withdrawals.

The current rate of inflation is 2%, an historically low level. At 2%, it takes 35 years to cut the value of your investment portfolio in half. At 3%, which is the longer-term average rate of inflation in the U.S., it takes only 23 years to cut the value of a dollar in half.  Another way to rephrase this is that living expenses will double in that time frame. These numbers are exponentially worse at higher inflation rates.

The number one risk retirees face is that their living expenses will increase at a faster rate than their investment portfolio can grow to sustain those withdrawals.

With the cost of healthcare and long-term care rising faster than the overall rate of inflation, this risk is growing. But inflation is not as tangible a risk as market declines. Like a frog in lukewarm water over a boiler, we cannot detect it as easily as we can dips in the stock market. Our brains are hardwired to identify immediate risks, not long-term ones.

When I was pregnant with my son, I was blown away by the list of things pregnant women in American are told NOT to do. No alcohol, no sushi, no soft cheeses, no snow-skiing, no horseback riding, no caffeine, no deli meat, no hot baths, no fun, period! Each of these recommendations stem from a small number of illnesses or accidents, and without a doubt, the stakes are high. No mother-to-be wants to do anything to risk the life or health of her unborn child. But I find these suggestions to be a little disingenuous if they don’t mention driving. I don’t have the data, but I am willing to bet more pregnant mothers and their fetuses are harmed or die from car crashes, than from any of the risky behaviors mentioned above.

What are you afraid of? Flying or driving, shark attacks or heart disease, terrorists or domestic violence, bear markets or loss of purchasing power due to inflation? In each of these pairings, you are more likely, probabilistically, to suffer from the second risk. Perhaps you have spent time worrying about the wrong risk.