The stock market isn’t making news right now. The news this morning was dominated by a nuclear deal between the US, UK, and Australia, the chaos in Afghanistan, and the first civilian spaceflight by SpaceX. There’s a lot going on in the world, and the stock market is boring. I love it this way.

In the early ’90s, the Chicago Board Options Exchange (CBOE) began calculating the implied volatility of the stock market and published an index called the CBOE Market Volatility Index or VIX for short. The VIX is now an oft-quoted measure followed by investment professionals, journalists, and day traders alike. It spiked during the Great Financial Crisis, reaching a high of 80.74 in November of 2008, and it surpassed that peak during the COVID crash last year. Since its inception in 1990, and the average level of the VIX has been 19.48. The VIX is at 18.68 as I write this post. In short, things are calm right now. 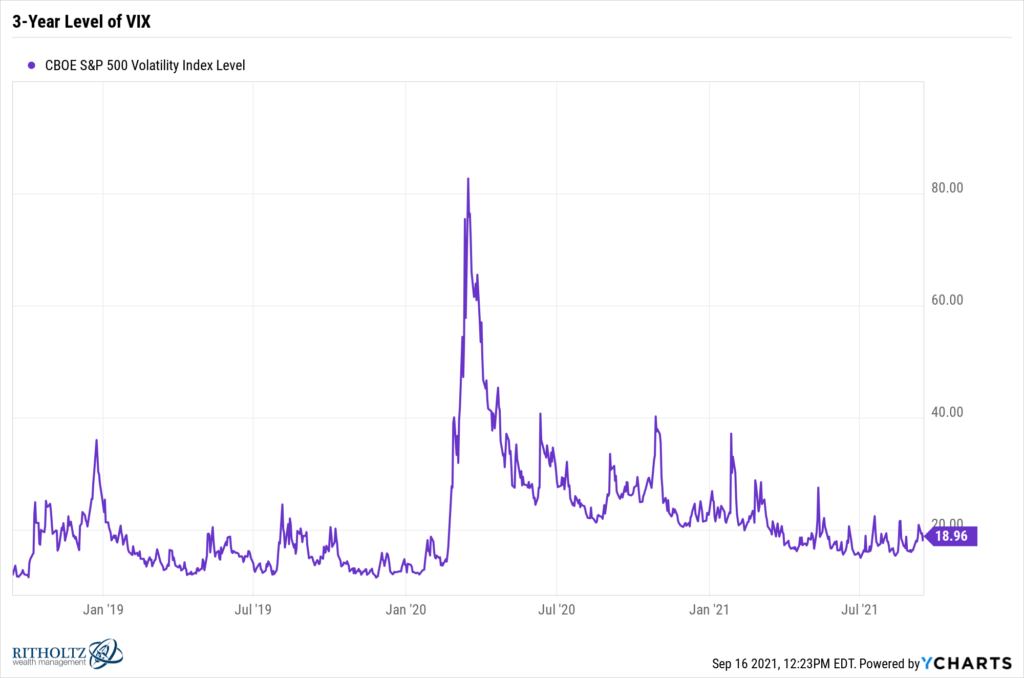 I’m not making a market prediction. The second I hit publish, everything can change. But it has me repeating the following mantra – “Boring is Beautiful” – when it comes to investing.

One of my favorite quotes from Jack Bogle, the legendary founder of Vanguard, is this:

I’ve often said, also, when you get those regular retirement plan statements—IRA statements, your own personal retirement plan, 401(k) statements—don’t open them. Don’t peek. And when you do peek—which you’re only allowed to do when you get your final retirement statement—be sure you have a cardiologist standing by. Because you will be so amazed at how much money you’ve accumulated over 20 or 30 or 40 or 50 years that you won’t believe it. You’ll probably faint, or something worse, and there will be a doctor there to revive you.

Compound returns are the 9th Wonder of the World. I truly believe that. But they take time, an entire lifetime, to become a wonder. The path along the way is boring on most days. I liken it to watching paint dry. It seems like nothing is happening and the market is going sideways. On the flip side, however, investing is terrifying. Last spring, we saw stocks fall 35% in six weeks. From peak to trough of the financial crisis, stocks were down 60%. Those memories still make my hair stand on end.

That’s why I prefer the boring part and find it beautiful.

Boring also means eschewing the hot tips and trends of the day. It happens less and less these days, but I want to throw up in my mouth every time someone asks me for a stock tip. I get it, shiny objects are captivating, and apparently, today’s shiny objects are fake rocks bought with fake money in the fake metaverse. Yes, I know these things aren’t all fake, but to the average investor, they might as well be. But back to the boring stock market …

My answer to the stock tip question is such a snoozer – rather than worry about individual companies, I invest in the entire (publicly traded) future potential of human innovation and ingenuity. That’s a fancy way of saying, buy an index fund, or something like it. Why take the chance trying to pick the winners, and oftentimes missing them, when I know the overall return is good three, four, five decades later? At this point, the questioner is searching for someone across the room to engage instead of me.

When the stock market makes headline news, it’s never for the boring part. Pundits don’t appear on financial television to preach this boring message or they would never be invited back. Your investment strategy shouldn’t make your heart rate or blood pressure rise. And it shouldn’t add excitement to your life. Save the excitement for your friends and family, and for the memories you will make together while living off your boring, mundane investment portfolio.

Then life is beautiful.