Stocks are off to a rocky start this year. For the first time in a long time, growth stocks are missing their earnings expectations, and their stock prices are falling off a cliff. I had almost forgotten what it’s like to see a company miss by a penny and drop like a rock. Even though the underlying earnings of the company are still growing, they are growing at a slower rate. All of the excitement about the stock’s future was priced in, and that balloon pops in the face of reality.

The darlings of the past decade, the FAANG stocks – Facebook, Apple, Amazon, Netflix, and Google – are experiencing a huge disparity of outcomes this earnings season. Facebook (newly renamed Meta Platforms) grew its revenue by $4.6 billion over the prior quarter but missed its earnings target by 4%. The stock dropped 25% the next day, the largest one-day loss of market capitalization ($239 billion) in history.

Meanwhile, Amazon, although not immune to market-wide selling in January, added the largest-ever one-day gain to its market cap ($190 billion) after an earnings surprise last Friday. That came on the heels of the previous one-day record ($181 billion) when Apple reported its earnings one week before.

Not to be outdone, Google’s parent company Alphabet, reported $30 billion of earnings on $75 billion in revenue and announced a 20-1 stock split. Investors love a stock split. Even though stock splits are meaningless accounting, there’s a mental comfort level with stock ‘prices’ being below a certain level. These numbers are mind-numbing if you take a step back. Google collected over $75 billion of revenue in three months.

Finally, Netflix beat its earnings expectations and met its revenue ($7.7 billion) target. But the stock dropped 20% the night after the company forecast a slowdown in new subscribers this quarter. Netflix had 8.3 million new subscribers in the 4th quarter but expects only 2.5 million in this quarter.

Here’s a look at the year-to-date performance disparity for the FAANG stocks. We may look back at this as the moment we finally stopped referring to these companies as a group. 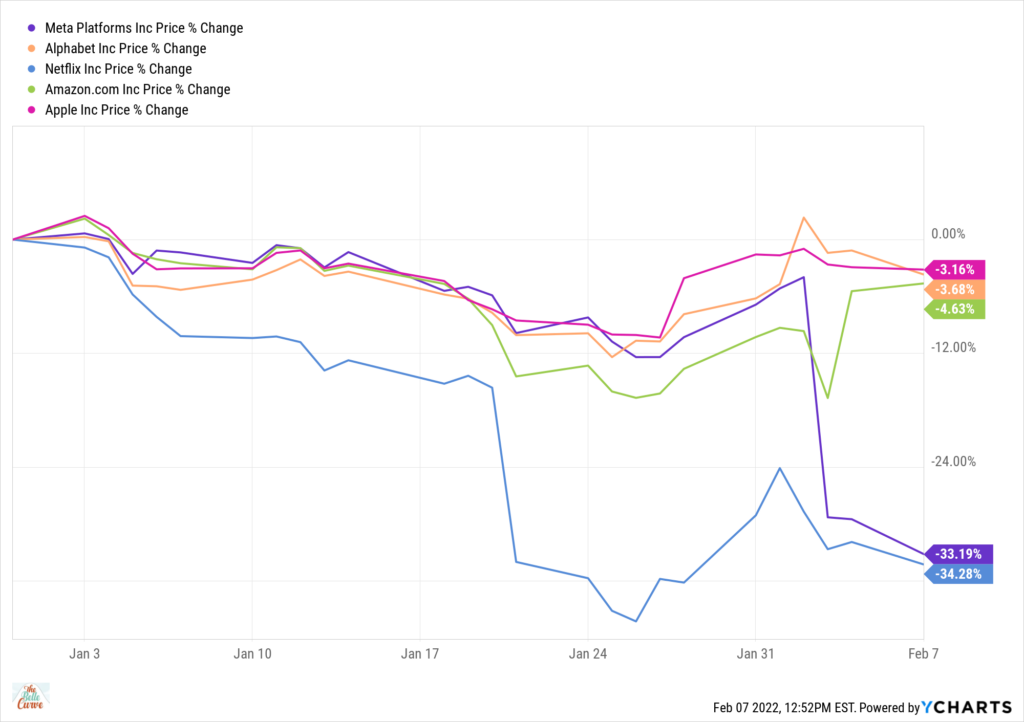 Growth stock investing has two modes – 1. incredible euphoria and outsized gains and 2. massive disappointment and having the rug pulled out from under you. The shift from one mode to the other is instantaneous. The market goes from love to hate faster than the blink of an eye.

There is a group of investors who’ve never seen the end of a growth stock boom. You almost have to go back to the dot.com bust to see the massive cliff dives we’ve witnessed in the past two weeks. I grew up on value investing, so I’d be lying if I said there wasn’t a small part of me that is relieved that this moment has finally arrived. All those years of something that seemed too good to be true were unsettling to me.

The good news is that long-term investors in Facebook and Netflix have done just fine. If they can bring themselves to diversify, those gains have a chance to survive. A spoonful of sugar helps the medicine go down.

Who’s ready for the next market regime? I do believe we are about to embark on a new journey. Maybe I’m wrong, but I’d be fine with this being the end of the FAANGs.