Cash is back! It was only a year ago that people were so desperate for yield that the Wall Street Journal asked me if savers should put some of their home down payment savings in the stock market. Now we have high-yield savings accounts topping 3%. Three-month Treasuries are yielding 4.4% and 12-month paper is near 4.75%. These yields could top 5% if the Fed raises rates again in December as expected. Savers are getting paid again. What a sweet relief to the decade-plus of ZIRP policies (zero interest rate policy).

I remember 5% CDs (certificates of deposit) in the early aughts. Back then, Suze Orman still pined for 8% money market rates on afternoon talk TV. When I learned about the risk-free rate in college, the long-term average was 3%. But for more than 12 years, the Fed Funds rate was below 3% and for most of that time near zero. Zero-interest rate policy began after the Great Financial Crisis and only ended with the September Fed hike. Europe even toyed around with negative interest rates for a while. It was wild.

ZIRP is not the normal state of the monetary system. Where we are today is normal. Savers should be paid to wait, and the risk-free interest rate should not be zero. That was insane. Everyone got so high on the supply of free money that we forgot the basics of how money works. Unwilling to park cash in zero-interest savings accounts, investors went on a mad dash of risk-taking.

In recent years, I have been bombarded by investors questioning why they should place any portion of their portfolios in bonds. Cash was never even under consideration. I do give credence to the argument that historically low-interest rates had nowhere to go but up, and that rising interest rates cause bond prices to fall. Regardless, my point on the investor question about bonds was merely the start of the risk-taking debauchery that ensued.

Retirees who grew up in the post-World War II era had a hard time wrapping their heads around zero interest rates. How exactly, were they supposed to live on the interest of their savings without spending the principal? Unfortunately, 1-2% yields on bonds aren’t enough to live on interest alone. So they reached for yield. Yield searching took the form of MLPs, junk bonds, preferred stocks, high dividend stocks, and even structured notes. The problem is that reaching for yield will always come back to bite. In the case of MLPs, it was an oil crash in late 2015, followed by the realization that exiting MLP positions created an enormous accrued tax liability. Never underestimate the financial industry’s ability to manufacture and sell investors exactly what they want, with no consideration for what they need.

But investors in the ZIRP era didn’t stop there. Fancier dreams were sold to them in the form of private equity and venture capital. Here was a chance to get in on the real action, before a growth company IPOs, and the return potential is watered down (their words not mine). Flush with hoards of investor cash and nervous with the FOMO on the next Silicon Vally unicorn, venture capital firms sprayed and prayed, making investments in any Stanford grad with a slide deck. Fake it to you make it, embodied by disgraced Theranos founder, Elizabeth Holmes, was the beat of the tech start-up world. Facebook’s freemium model (the user as product) inspired companies to burn cash and build the biggest network. Leave the profit part for later. Investors lined up to sink more cheap money in at the next funding round.

This bacchanalia of cheap money eventually led investors further along the risk spectrum. Then the COVID pandemic confined everyone to their homes for a few months. For a moment, we removed the beating heart from the economy and laid it on a bed of ice. The Fed cut rates a full 1.00% at a special Sunday meeting, and the Federal government shot a bazooka of fiscal stimulus into the system. Part of that bazooka took the form of individual stimulus checks, or “Stimmies” as they were affectionately nicknamed.

Those “stimmies” led to a retail investor mania. The mania meandered into the creation of infamous “Meme stocks” where bands of merry traders colluded to run up the prices of otherwise failing companies such as AMC Theaters and Gamestop. Cryptocurrencies were also the rage, especially the jokester ones like Dogecoin and Shiba Inu coin. There were those weeks we went around checking the DOGE price 200 times a day on our phones. Remember that? The crescendo came with endless SPAC (blank check company) formation. Venture capitalist cum altruist savoir Chamath Palihapitiya embodied the 2021 SPAC craze. Arod had a SPAC. Even disgraced former President Donald Trump has an associated SPAC to raise money to fund his media empire dreams.

But even those who kept their noses clean of meme stocks, Dogecoin, and SPACs, fell prey to ridiculously high valuations in public and private equity markets. Cathie Wood’s ARK Innovation ETF is 77% off its February 2021 all-time highs. Fan favorites Netflix, Meta (Facebook), Nvidia, and now Amazon are down more than 50%. 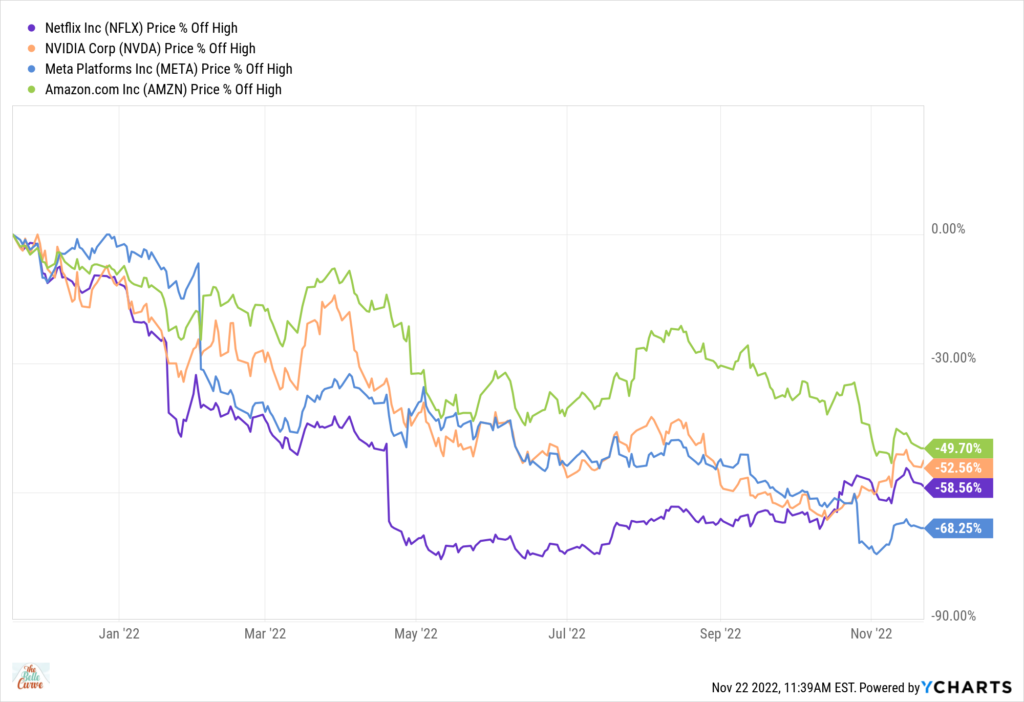 The market has been particularly cruel to companies that IPO’d shortly before the music stopped. Rivian, Oatly, Beyond Meat, Robinhood, and Peleton are down between 85% and 95% from their issue price. 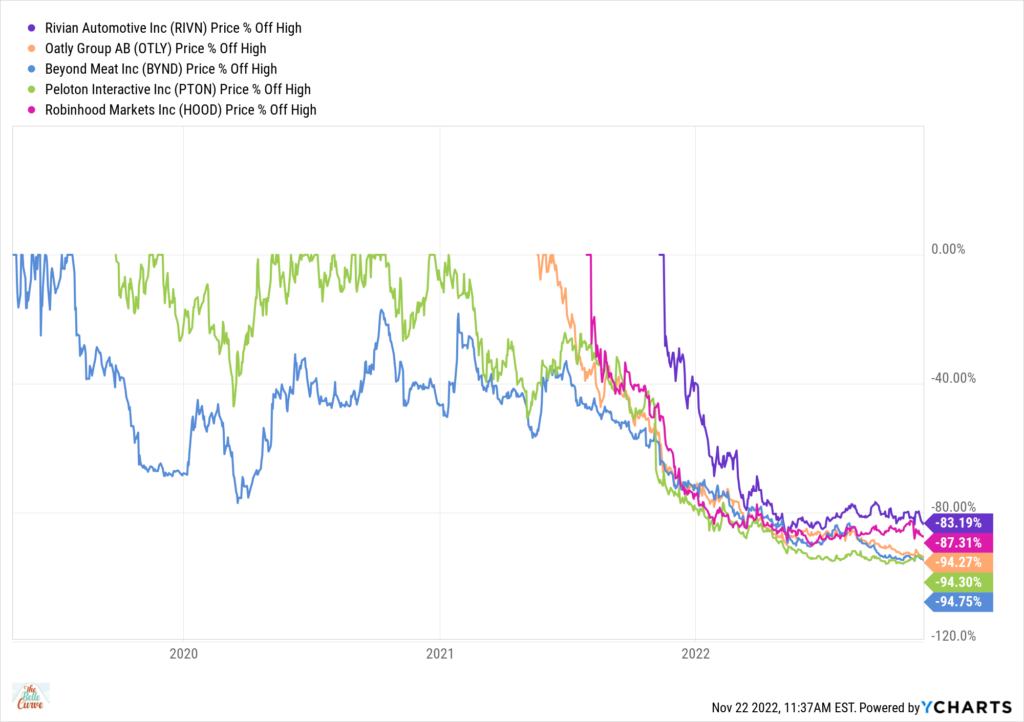 And yet we are fixated on writing obituaries for the 60/40 portfolio.

This cleansing of exuberance from the financial system has been painful, to say the least. But from these ashes, we are reestablishing a sense of normalcy in financial markets. The normal state incentivizes cash savings and collecting bond coupon payments. In this new normal, risk-taking returns to its rightly held domain, for long-term investments designed to withstand volatility. Private investments will receive proper due diligence again. Start-ups will need more than a charismatic founder with an ivy league pedigree and a pipe dream. Venture investors will rethink valuations and start digging into actual business model projections.

In this new era, we will think twice before withdrawing our 3%+ cash from savings to put it at risk. And that puts my mind at ease when I consider investing for the next 10, 20, 30 years, and beyond. There will be more economic cycles, more bear markets, more geopolitical risks, and even more manias. But we have a chance to start fresh from a more natural market equilibrium with the risk-free rate finally above zero. And by the way, the diversified investor hasn’t experienced anything nearly as bad as the pain described above. That horrible 60/40 portfolio is down *only 15% year-to-date.